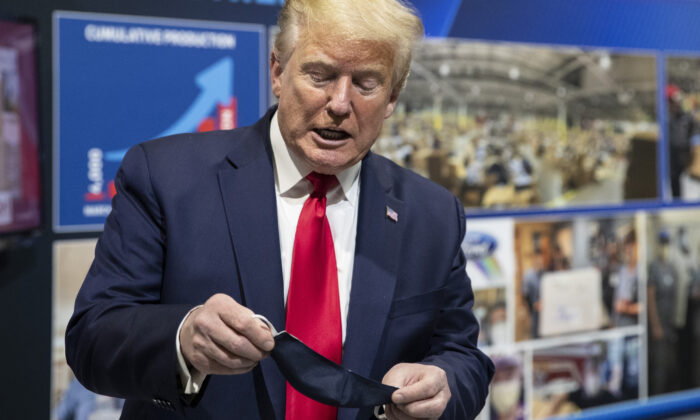 Donald Trump Says He Got a COVID-19 Booster Shot

Donald Trump revealed on Sunday that he has received a COVID-19 vaccine booster shot.

The former U.S. president confirmed the news during a Sunday question-and-answer session in Dallas on Bill O’Reilly’s “History Tour.”

A video of the press event was shared on social media by O’Reilly’s new organization, No Spin News, and appears to show a small portion of the audience at the event yell out in response to his admission.

“Both the president and I are vaxxed, and, did you get the booster?” O’Reilly asked Trump, to which he replied, “Yes.” O’Reilly then said, “I got it, too.”

Their answers prompted audible exclamation from some audience members, to which the former president began waving his hand dismissively and said, “Oh, don’t, don’t, don’t!” before attributing the negative response to a “very tiny group over there,” while pointing them out.

The Epoch Times has contacted a Trump spokesperson for more details on his decision to get the booster shot.

In a longer video later posted by No Spin News, Trump said his administration and the American people did “something that was historic” and “saved tens of millions worldwide” by creating the vaccine.

“We got a vaccine done in less than nine months, that was supposed to take from five to twelve years. Because of that vaccine, millions and millions of people. I think this would have been the Spanish flu of 1917 where up to 100 million died, this was going to ravage the country far beyond what it is right now,” he said.

He then urged the audience to “take credit for it,” stating that “what we’ve done is historic. Don’t let them take it away. Don’t take it away from ourselves. You’re playing right into their hands when you sort of like, ‘Oh the vaccine.'”

However, Trump said that people who don’t want to take the vaccine should not be forced to do so, and said he disagreed with vaccine mandates.

Mandatory vaccine programs, enforced by the Occupational Safety and Health Administration, are currently in place in the United States after President Joe Biden in September issued a sweeping set of new rules for employees regarding vaccinations and testing.

However, lawsuits from states across the country have been mounting in response to the mandates, which are scheduled to take effect on Jan. 4 and dictate that employers with 100 or more employees ensure each of their workers is fully vaccinated or that they test for COVID-19 on at least a weekly basis. All unvaccinated workers must also wear a mask in the workplace.

Trump previously said he and former First Lady Melania Trump were vaccinated before leaving the White House in January but did not say if they received the Moderna, Pfizer, or Johnson & Johnson vaccine.

Speaking to the New York Post in April, the businessman said that the vaccine “is a great thing and people should take advantage of it,” but that “nobody should be forced” as Americans “have our freedoms.”

“But I strongly recommend it because it’s a real lifesaver,” Trump said.

Back in September, he told the Wall Street Journal that he had no plans to get a booster shot, stating, “I’ll look at stuff later on. I’m not against it, but it’s probably not for me.”