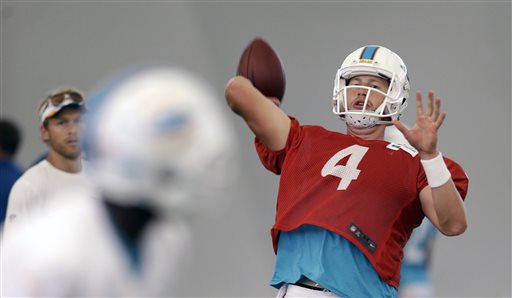 The Miami Dolphins will take on the Atlanta Falcons on August 8 in the first NFL preseason game for both teams.

The game at the Georgia Dome in Atlanta is slated to kickoff at 7 p.m. EDT.

The game will be broadcast on CW69 in the Atlanta area, with radio coverage available via Star 94 and 790 The Zone.

Live streaming will be available through NFL Preseason Pass, which costs $20 for access to all preseason games.

Next week, Miami will take on the Tampa Bay Buccaneers in Tampa Bay on Saturday at 7:30 p.m.

Next week, Atlanta will take on the Houston Texans in Houston on Saturday at 8 p.m.

Week 4 will have the Falcons travel to Jacksonville to play the Jaguars on Thursday, August 28 while the Dolphins will play the Rams in Miami on the same day.

Atlanta Falcons quarterback Matt Ryan walks off the field before the first half of an NFL football game against the Miami Dolphins, Friday, Aug. 8, 2014, in Atlanta. (AP Photo/David Goldman)

The Dolphins may not have the opportunity to learn more about their top contenders to be the No. 2 quarterback behind Ryan Tannehill.

Miami backups Matt Moore and Pat Devlin have been hurt in training camp, so coach Joe Philbin may give substantial playing time to Seth Lobato and Brock Jensen, who are likely to have little chance making the roster.

Philbin said he has a plan for distributing snaps for the quarterbacks through the preseason.

“We have projected numbers for all four games already,” said Philbin, adding the plan calls for Tannehill to receive about 95 snaps. “I don’t think it’s going to change a whole lot this week, but we’ll see.”

Moore, No. 2 on the depth chart, has been slowed by a shoulder injury and his status for Friday night’s game is uncertain. Devlin has a hamstring injury.

The Falcons acquired T.J. Yates from Houston in June. Coach Mike Smith said Yates and Sean Renfree are in a tight race for the No. 2 job.

Yates started in five of his 13 career games with Houston, giving him a big edge in experience over Renfree, who didn’t appear in a game in his 2013 rookie season. But Renfree has had more time in the Falcons’ offense while Yates has had to try to learn the playbook quickly.

“The last couple of weeks in training camp have kind of been a whirlwind for me,” Yates said Wednesday, adding he has been “grinding away” to feel comfortable with the new terminology.

“I’m trying extremely hard to play a lot of catch-up,” he said.

Renfree, a seventh-round pick from Duke in 2013, said he’s more confident in his second training camp.

“It’s good to get an offseason under my belt,” Renfree said. “(Yates) just came here and I’m going into my second year, so definitely that helps me. But he picks it up pretty quickly.”

Rookie Jeff Matthews of Cornell is the longshot in the Falcons’ competition.

Falcons running back Steven Jackson has been out since hurting his left hamstring in the team’s first practice in full pads. Jackson’s injury creates an opening for rookie Devonta Freeman, but Jacquizz Rodgers has been working with the first-team offense. Smith said Antone Smith has earned a bigger role this season.

Smith announced Thursday rookie linebacker Marquis Spruill tore the anterior cruciate ligament in his left knee late in Wednesday’s practice and is lost for the season.

Spruill was listed as the No. 3 linebacker on the team’s first preseason depth chart, which was configured for a nickel defense. Spruill, a fifth-round pick from Syracuse, likely would have been listed as a top backup at inside linebacker in a base defense.

It is the second season-ending injury for a Falcons linebacker this year. Starter Sean Weatherspoon suffered a season-ending Achilles injury in June.

The Dolphins are expected to hold out receiver Mike Wallace, who has a hamstring injury.

The preseason opener will be the first test for Miami’s offense under new coordinator Bill Lazor.