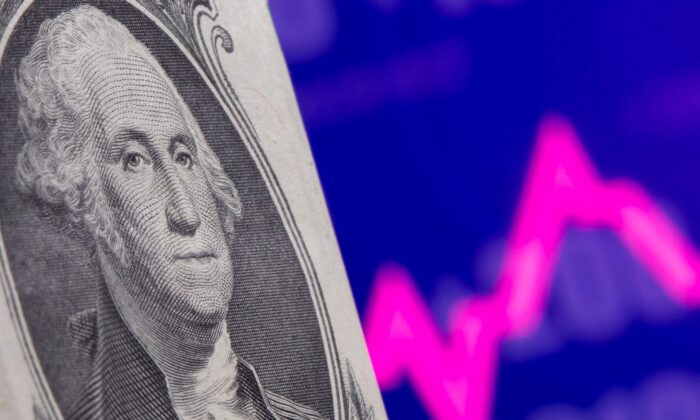 A U.S. one dollar banknote is seen in front of displayed stock graph in this illustration taken on May 7, 2021. (Dado Ruvic/Illustration/Reuters)
Markets

Dollar Ticks Up as Case for March Fed Hike Grows

LONDON—The dollar ticked up on Monday amid rising bets U.S. inflation will bolster the case for higher interest rates while the European Central Bank’s dovish stance on rising prices weighed on the euro.

The dollar had met with selling late last week after a weaker-than-expected headline U.S. job-creation figure squeezed traders out of long dollar positions.

But analysts said better-than-expected unemployment numbers and U.S. inflation figures expected to show headline CPI at a red-hot 7 percent year-on-year on Wednesday, make a good case for interest rates to rise sooner rather than later.

“The Fed is likely to feel the pressure from this early additional price pressure and feel compelled to start the hiking cycle even as soon as the March meeting,” said Elsa Lignos, Global Head of FX Strategy at RBC Capital Markets.

Traders have priced an over 90 percent chance of a rate hike in March according to CME’s FedWatch tool and investors will be waiting for clues from Federal Reserve chair Jerome Powell and governor Lael Brainard who will testify before Senate committees this week.

In morning trading in Europe, the dollar index, which measures the greenback against major peers, was up 0.18 percent at 95.964.

Investors believe the ECB is still far behind the Fed in the tightening cycle despite data showing euro zone inflation jumped to 5 percent in December.

Comments by an ECB policy maker on Saturday, however, fuelled doubts about whether the central bank could possibly tweak its stance moving forward.

“This morning euro-watchers are dissecting a weekend speech from Isabel Schnabel suggesting that energy transition will pressure inflation and could see the ECB’s inflation forecasts revised higher,” ING analysts said in a morning note.

“For the time being, however, the clear and present danger for tighter policy clearly comes from the US right now,” they believe, adding they currently expect the ECB to tighten in March 2023.

Sterling was marginally weaker on the dollar, down 0.05 percent at $1.3591 but has been rallying with bets that the Bank of England (BOE) is likely to be hiking in tandem with the Fed.

The Australian dollar wobbled around $0.7195, finding a little help from a lift in Aussie bond yields.

Cryptocurrencies have faced pressure from broad selling in risk assets at the start of this year, but were steady in Asia after bitcoin managed to hold support at $40,000 through weekend trade.