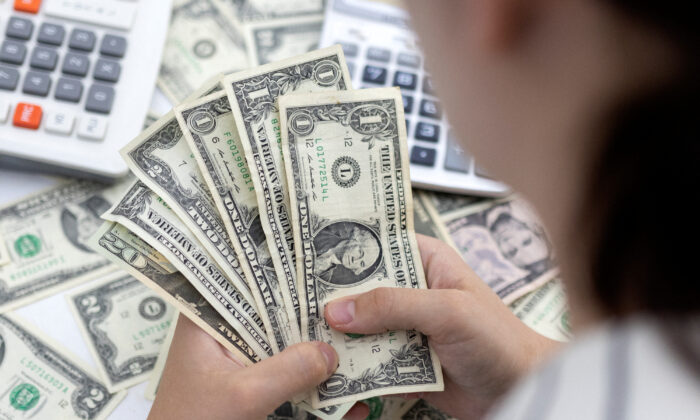 Dollar Steady With Fed in Focus, Swiss Franc Strongest vs Euro Since Jan 2015

SINGAPORE/LONDON—The dollar held near recent peaks on Thursday, supported by the view that the Federal Reserve will keep tightening policy aggressively, while the Swiss franc hits its strongest against the euro since the Swiss National Bank removed its floor under the currency in 2015.

The franc rose 0.5 percent against the euro to as high as 0.9529 francs, its strongest level against the single currency since Jan. 15 2015, the day the SNB scrapped its minimum exchange rate of 1.20 francs per euro.

The franc also strengthened 0.7 percent against the dollar to 0.95645 francs.

“The Swiss currency right now is the only safe haven in the G10 and I think that’s appealing to investors, as next week with the FOMC it could be another choppy week for stock markets if the (Fed) raises by 75 or even a hundred basis points,” said Kenneth Broux, senior strategist at Societe Generale.

The Swiss National Bank also meets next week and Broux notes speculation that they could join the Fed and ECB with outsized rate increases.

Money markets are fully pricing in a 75 basis-point rate rise from the SNB, with just under a 50 percent chance of a full percentage-point hike, according to data from Refinitiv.

The dollar was up 0.3 percent against the yen at 143.55, having fallen 1 percent on Wednesday on news that the Bank of Japan had checked on exchange rates with banks—a possible preparation for yen buying.

This left the dollar index firm at 109.71, holding onto its 1.5 percent gain from Tuesday, when U.S. inflation data came in hotter than expected. That caused markets to reposition for a Fed seemingly left with little choice but to go for another large hike at its rate-setting meeting next week.

Fed funds futures are now pricing in around 30 percent chance that the Fed will hike rates by 100 basis points, with at least a 75 basis point increase fully expected by the market.

Traders will be watching U.S. retail sales and industrial production data due later in the day, since, as ING analysts note, data is the most likely thing to cause a dovish repricing.

The Fed, in recent months, has been unwilling to push back on hawkish market expectations.

Nonetheless, ING conclude: “We see a good chance that today’s data will not trigger any material re-pricing lower in Fed rate expectations, and the hawkish inertia into next week’s meeting means that the dollar can stay supported.”

Investors continued to consider whether Japanese authorities really would intervene to support their battered currency, which has fallen nearly 20 percent this year.

But some market watchers expressed skepticism that there would be a direct intervention, or that it would have much lasting impact. Satsuki Katayama, head of a ruling party panel on financial affairs in Japan, told Reuters that the country lacks effective means to combat the yen’s sharp falls.

A record Japanese trade deficit for August has also underscored the bearish case for the yen.

China’s yuan traded offshore slipped to seven per dollar in European hours on Thursday, the first time since July 2020, as markets continue to test Chinese authorities’ willingness to defend the symbolic level.

In crypto markets, ether did not move significantly after Vitalik Buterin, Ethereum inventor and co-founder, wrote on Twitter that a major software upgrade to the Ethereum blockchain aimed at slashing its energy usage has been completed.

The token, which underpins the ethereum network, was down 3 percent. Bitcoin was a touch softer at just under $20,150.