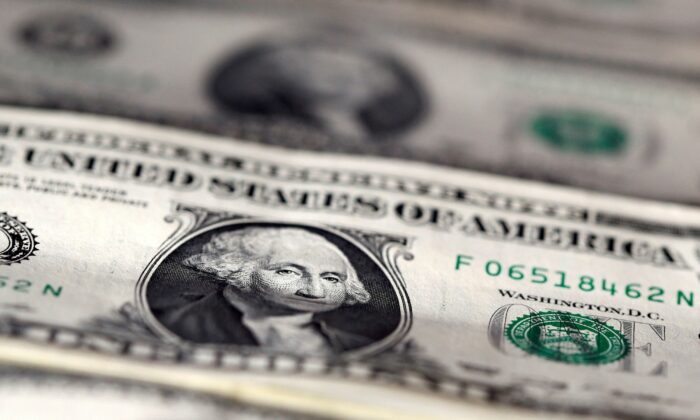 U.S. dollar notes are seen in this illustration on Nov. 7, 2016. (Dado Ruvic/Illustration/Reuters)
Markets

LONDON—The dollar lost further ground versus other major currencies on Thursday, after traders reined in bets on an aggressive interest rate hike by the Federal Reserve after softer-than-expected U.S. inflation data the previous day.

The dollar index remained on the back foot in European trading hours, slipping 0.2 percent to 105.000, after recording its biggest daily fall in five months, of 1 percent, the previous day.

Data on Wednesday showed U.S. consumer prices were unchanged in July, month on month, after advancing 1.3 percent in June.

“Yesterday’s data gave hope that inflation has peaked and the Fed will need to raise rates less sharply to keep inflation under control,” currency analysts at Commerzbank said in a note.

Traders pared bets the Fed would raise rates by 75 basis points for a third straight time at its September policy meeting, and now see a half-point increase as the more likely option.

Fed policymakers sought to temper any expectations of significantly looser policy, with Neal Kashkari telling a conference on Wednesday that the central bank was “far, far away from declaring victory” on inflation.

“While yesterday’s data clearly reduces the risk of further aggressive Fed action (+75bps) and therefore helps curtail U.S. dollar demand, we equally see it as unlikely that this data alone will prompt much further U.S. dollar selling from here,” currency analysts at MUFG said in a note.

The euro and Japanese yen were among the currencies to benefit from the dollar’s weakness and both added to the previous day’s gains.

Sterling dipped 0.2 percent against the dollar to $1.21980, after gaining more than 1 percent the previous day.