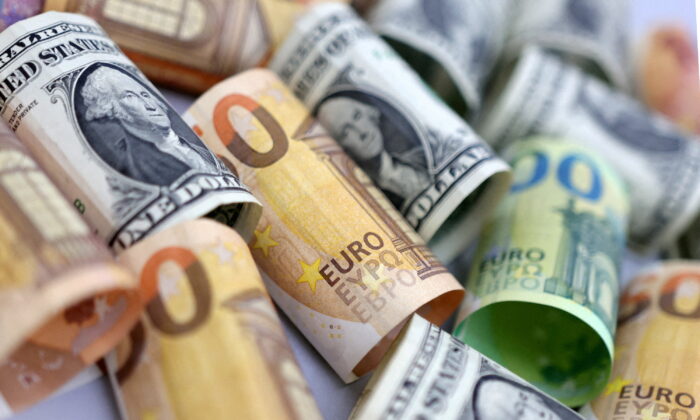 LONDON—The U.S. dollar declined to its lowest level in more than six weeks against the Japanese yen on Monday as investors ramped up bets that aggressive Federal Reserve monetary policy would tip the economy into a recession.

With traditional market gauges of recession such as yield curve spreads pinned near their lowest levels this year, punters have ramped up bets in recent days that U.S. interest rates will peak by the end of 2022.

The U.S. economy shrank for a second straight quarter, data released last week showed, intensifying an ongoing debate over whether the country is, or will soon be, in recession.

“With U.S. rates struggling to recover to levels seen prior to last week’s Fed meeting, the dollar started the week in a similar vein to how it traded towards the end of last week,” said Simon Harvey, head of FX analysis at Monex Europe.

“That is, the dollar is exposed to currencies with cheap valuations.”

The dollar sank to its lowest level versus the yen since mid-June below 132 yen, down more than 5 percent from a late 1998 peak of nearly 140 yen which it hit last month.

With China’s official measure of factory activity contracting in July as new virus flare-ups weighed on demand, and German retail sales posting their biggest year-on-year slump since 1994, the sentiment was decidedly cautious in London trading.

A broader index of the dollar against its rivals weakened 0.6 percent to 105.30, its lowest level since early July, as traders cut their long dollar positions, according to latest weekly positioning data.

“Markets are now locking horns with central banks in terms of their efforts to aggressively hikes rates to try and rein in inflation, with markets taking an increasingly confident view that central banks will have to abandon their inflation quest due to looming recession risks,” said Marc Ostwald, chief economist at ADM Investor Services.

The yield gap between 10-year U.S. Treasuries and equivalent Japanese debt held near its tightest level in nearly four months around 245 bps, denting the dollar’s appeal.

Data at the end of last week tossed the dollar in both directions, with it rising initially after the personal consumption expenditures price index showed the fastest inflation since 2005, only to sink after the final University of Michigan report—closely watched by Fed policymakers—showed slipping consumer inflation expectations.

The big economic focus for this week will be the monthly U.S. jobs report on Friday.

The euro benefited from the general dollar weakness, with the single currency rising 0.3 percent to $1.0253, continuing its consolidation near the middle of its range over the past week and a half.

The Aussie dollar rose 0.7 percent to $0.7042 to a six-week high before a central bank rate hike on Tuesday, where policymakers are widely expected to lift its cash rate by 50 basis points to 1.85 percent. That would be the fourth increase since May and the most aggressive tightening in decades.