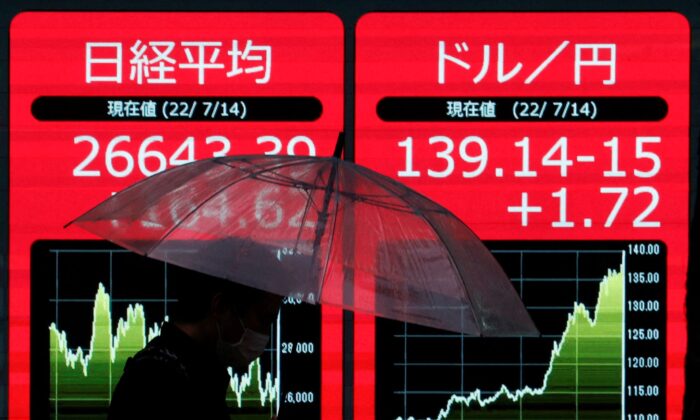 LONDON—World shares touched a two-month high and the dollar swooped towards a three-month low on Thursday, after Federal Reserve meeting minutes pointed to a slower pace of U.S. interest rate rises from next month.

With Wall Street shut for Thanksgiving, it was up to Europe to continue the rebound in market confidence that has been building for more than a month.

It seemed a bit of a struggle early on as London’s FTSE slipped 0.1 percent, but there were just enough gains in the rest of Europe and in Asia overnight to ensure things kept shuffling forward.

MSCI’s 47-country index of world stocks touched its highest since mid-September, while German and British government bond yields, which drive Europe’s borrowing costs, fell to their lowest since October and September respectively.

A “substantial majority” of Fed policymakers had agreed it would “likely soon be appropriate” to slow the pace of interest rate rises, the minutes released on Wednesday showed, although “various participants” had also said rates might need to go “somewhat higher than they had previously expected.”

Futures markets show investors now expect U.S. rates to peak just above 5 percent by next May and are pricing in a roughly 75 percent chance that the Fed switches to 50 basis point rises rather than the 75 bps it has been using recently.

For the currency markets, it meant the 7-week sell-off in the dollar continued.

“The dollar could stay pressured for a bit longer, but it’s probably embedding a good deal of Fed-related negatives now,” analysts at ING wrote.

The Fed wasn’t the only focus. Sweden’s crown nudged higher as its central bank increased its rates by three-quarters of a percentage point to 2.5 percent and signalled more next year.

Germany’s closely followed Ifo business climate index also rose more than expected, following on from some upbeat data from France too, while Turkey was expected to slash its rates again later despite eyewateringly high inflation.

The Bank of Korea had reduced its pace of rate increases to 25 basis points. In Japan, data showed manufacturing activity had contracted at its fastest in two years.

The country’s COVID-19 cases continued to surge, however, reaching a record high, with the economic toll from mobility restrictions and lockdowns piling up.

Investors remained sceptical whether Beijing’s plan to reduce banks’ reserve requirement ratio would do much to restore economic growth while the government sticks to a zero-COVID policy.

In the oil market, prices were slipping toward a major support level established in September. If they breach it, oil could tumble to levels not seen since before late 2021.

Brent crude futures fell 0.3 percent to $85.13. U.S. crude oil futures eased 0.2 percent to $77.74 per barrel. They had tumbled more than 3 percent on Wednesday as the Group of Seven (G7) nations considered a price cap on Russian oil above the current market level.

Such a curve inversion has not been seen since the dot-com bust of 2000 and, on the face of it, is a signal that investors expect a deep economic downturn in coming months.