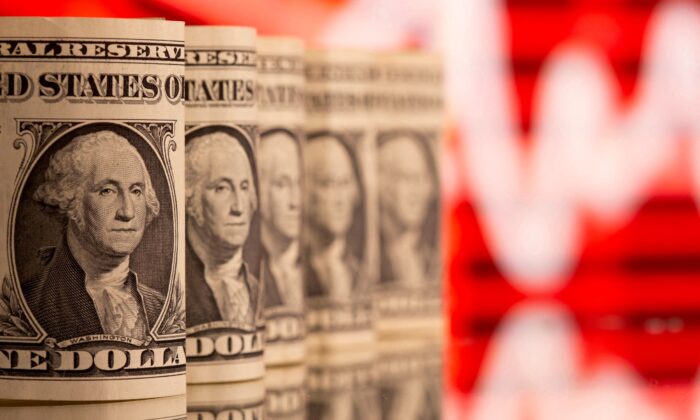 NEW YORK—The dollar rallied against the yen, euro, and other currencies on Tuesday after stronger-than-expected U.S. inflation data boosted investor bets that the Federal Reserve will need to stay aggressive in raising interest rates.

The dollar index, which tracks the greenback against its peers, was up 1.5 percent at 109.85 in its biggest one-day percentage gain since March 2020. It was still below last week’s two-decade peak of 110.79. The index turned positive after the data release.

The euro, pound and yen all weakened sharply. The euro was last down 1.5 percent versus the greenback at $0.9973, after hitting a nearly one-month high of $1.0198 in the previous session. The euro has traded below parity in 16 of the last 17 sessions.

According to the Labor Department report, U.S. consumer prices rose more than expected in August and underlying inflation picked up amid rising costs for rents and healthcare.

“The data was far stronger than expected. Particularly worrisome is the fact that core inflation came in almost double estimates,” said Karl Schamotta, chief market strategist at Corpay in Toronto.

“This is going to put the idea of transitory inflation to bed for now and anchor U.S. yields and the dollar substantially higher. The key thing here is that we’re now looking at near-certain odds on a 75-basis-point move next week.”

After the report, interest-rate futures traders dumped any lingering bets on Fed policymakers slowing their rate hike pace when they meet next week. They piled into bets on a third straight 75 basis points hike that would lift the Fed’s current 2.25 percent to 2.5 percent policy rate range to 3 percent to 3.25 percent, and rate contracts now also reflect about one-in-four odds of a surprise full-percentage-point increase at the Sept. 20–21 meeting.

Against the yen, the dollar was last up 1.2 percent at 144.51. Earlier, the Japanese currency found support from comments from officials signaling the government could take steps to counter excessive yen weakness.

Sterling was down against the dollar as well. The pound was last down 1.6 percent at $1.1499. Earlier in the day, it rose to a two-week high after the British jobless rate dropped to its lowest level since 1974, while wages excluding bonuses rose by 5.2 percent, the highest rate since the three months to August 2021.