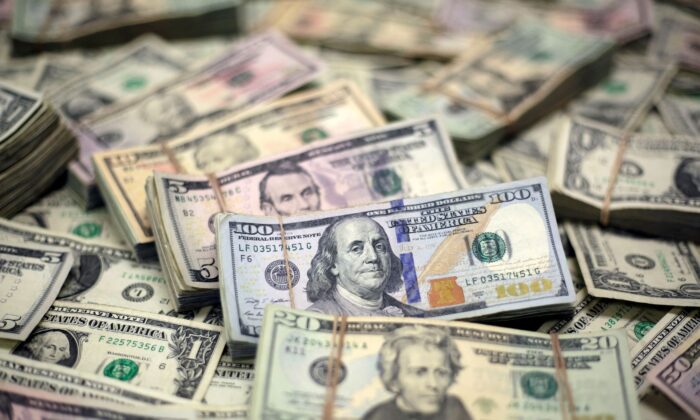 LONDON—The dollar hovered above a one-week low versus major peers on Friday, taking a breather after its biggest drop in almost a month overnight, as questions lingered about the fate of property developer China Evergrande Group.

The yen fell to its weakest since mid-August as Treasury yields pushed to the highest since the start of July.

The dollar index, which measures the greenback against a basket of six rivals, rose 0.08 percent to 93.175 after sliding 0.36 percent on Thursday and touching the lowest since Sept. 17 at 92.977. That erased gains for the week, and set the index up for a 0.09 percent decline.

The safe-haven dollar was hurt after Beijing injected new cash into the financial system on Thursday, when Evergrande announced it would make interest payments on an onshore bond.

However, some holders of its offshore bonds said they had not received coupon payments by a Thursday deadline. More dollar bond interest is due next week.

Hawkish comments from the Bank of England (BOE) on Thursday pushed up yields globally, a day after the U.S. Federal Reserve said it could start reducing its monthly bond purchases by as soon as November, and that interest rates could rise quicker than expected by next year.

The BOE said two of its policymakers had voted for an early end to pandemic-era government bond-buying and markets brought forward their expectations for an interest rate rise to March.

“Improved sentiment has weighed on the dollar, which is also discounting markets’ reluctance to align with the Fed’s Dot Plot.”

Westpac sees the dollar index flat to slightly higher into the end of the year, but keeping to a 92.0–93.5 range in the near term.

“The Fed’s clear taper signal and inching forward of rate lift-off plans, not to mention ongoing uncertainty around Evergrande, should contain the downside,” Westpac strategists wrote in a report.

Meanwhile, National Australia Bank said a sharp decline in dollar sentiment would be needed to hit its year-end target of 89.6 for the dollar index, “and there are no obvious short-term triggers” for that, strategists wrote in a research note.

Several Fed officials are due to speak on Friday, including Chair Jerome Powell, who gives opening remarks at a Fed Listens event.