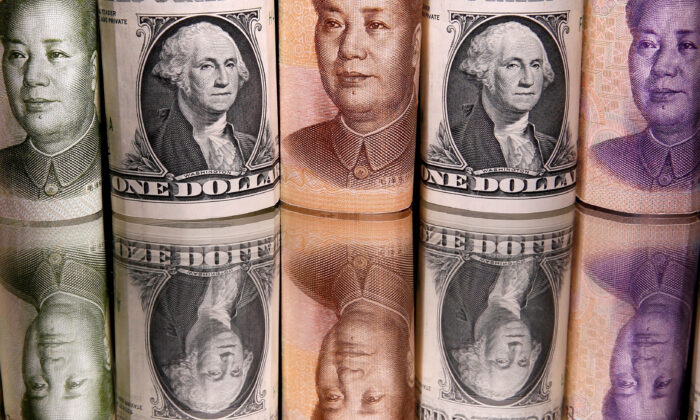 LONDON—The dollar rallied again on Friday, as U.S. Treasury yields rose ahead of a potentially huge Federal Reserve interest rate hike next week, while China’s yuan weakened past the psychologically important threshold of 7 per dollar.

The dollar, measured against a basket of currencies, is headed for a near 1 percent rise this week, as investors flocked to the safety of the greenback. The yuan is the latest currency to hit a multi-year low as the dollar rises relentlessly.

“With the Fed set to hike by possibly another 175 bps before year-end, we would expect financial conditions to remain unfavourable for assets generally and it clearly points to the U.S. dollar being the primary beneficiary,” said Derek Halpenny, head of research, global markets, MUFG.

The towering dollar pushed the offshore yuan past the critical threshold of 7 per dollar for the first time in more than two years overnight, with the yuan hitting a trough of 7.0424.

Traders will now shift their focus to a slew of monetary policy meetings by the Federal Reserve, the Bank of Japan (BOJ), and the Bank of England next week, with the Fed in center stage.

This could spell further pain for the battered Japanese yen, which has been a victim of the surging greenback and growing interest rate differentials.

The dollar was 0.2 percent lower against the yen at 143.16, but remained on track for a fifth straight weekly gain.