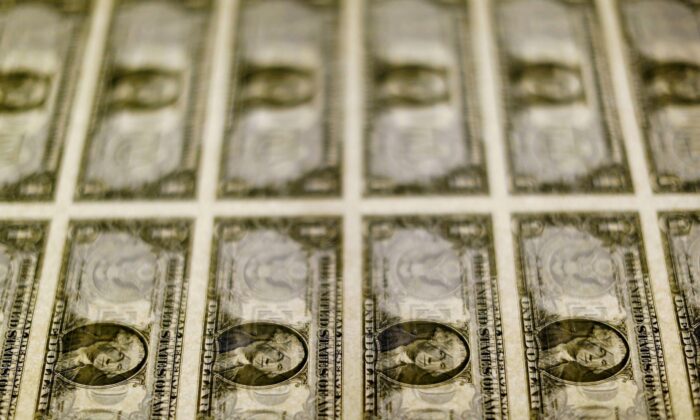 U.S. dollar bills are seen on a light table at the Bureau of Engraving and Printing in Washington on Nov. 14, 2014. (Gary Cameron/Reuters)
Business & Economy

LONDON—The dollar rose on Wednesday amid nervousness that surging energy prices could spur inflation and interest rate hikes, and as traders awaited U.S. jobs data for clues on the timing of Federal Reserve policy tightening.

The Reserve Bank of New Zealand lifted its official cash rate for the first time in seven years, but its resolutely hawkish tone only seemed to add to expectations that the Fed would follow suit and the kiwi dipped as U.S. yields rose.

The yen fell to a one-week low of 111.79 per dollar in tandem with a rise in Treasury yields, which can draw investment flows from Japan. It was within range of the 18-month trough of 112.08 that it visited last Thursday.

The greenback has won support as investors brace for the Fed to begin tapering asset purchases this year and lay the ground for an exit from pandemic-era interest rate settings well before central banks in Europe and Japan.

ING’s G10 FX strategist Francesco Pesole said a “bullish cocktail” was being mixed for the dollar, with the U.S. yield curve steepening again and a hawkish set of “dot plots” at the Fed’s September meeting.

The dot plot is a chart that indicates Fed policymaker expectations for where interest rates will be in the future.

“Add in any strong employment data and market expectations may swing towards Fed projections of a steepish three-year tightening cycle starting next year,” Pesole said in a morning note.

“Thus look out for ADP data today. Any upside surprise to the 430k consensus figure could lift short-term US rates and the dollar.”

Fed funds futures markets are priced for rate hikes to begin around November 2022, but anticipate rates topping out at just over 1 percent through most of 2025 even though Fed members project rates reaching 1.75 percent in 2024.

U.S. non-farm payrolls data due on Friday is seen as crucial to informing the Fed’s tone and timing, especially should the figures wildly impress or disappoint. Private payrolls figures, a sometimes unreliable guide, are due around 1215 GMT.

Nervousness about higher energy prices dragging on growth or flowing through to broader inflation took the edge from the support that the surge had lent to commodity-linked currencies.

The Canadian dollar eased from a one-month peak and the Norwegian crown pulled back from a three-month top.

Sterling has recovered some of last week’s sharp sell-off against the dollar, but lost momentum through the Asian session and it fell 0.4 percent to $1.3570 and held just below Tuesday’s three-week peak on the euro.

In New Zealand, a 25 basis point rate hike and familiar hawkish tone from the central bank did little to support the currency, despite expectations for further hikes in November and February.

“We’re on a path towards a series of rate hikes and the market is well priced for that,” said Jason Wong, senior market strategist at BNZ in Wellington.

For the kiwi, that meant “the U.S. dollar is in charge”, he said.

“That’s about the Fed, really, but globally what we’re seeing in China and the energy crunch we’re seeing in Europe all feeds into the mix and all makes markets nervous, which adds to support for the dollar.”