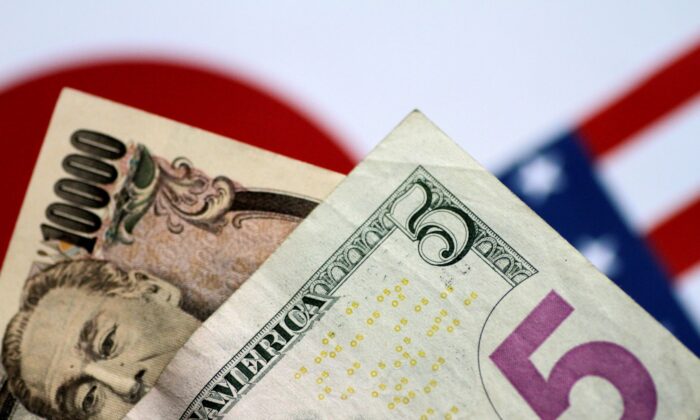 TOKYO—The dollar hovered near a two-decade high hit in the previous session on Thursday as investors looked for fresh insight on the global monetary tightening path from a European Central Bank rate decision and comments from the head of the Federal Reserve.

The ECB is widely expected to raise rates by 75 basis points (bps) later on Thursday (1215 GMT) to fight runaway inflation, although Europe’s energy crisis has kept the euro under pressure.

Federal Reserve Chair Jerome Powell will participate in a discussion at a Cato Institute conference, with Fed officials soon due to enter into a blackout period prior to the U.S. central bank’s Sept. 20–21 meeting.

Recent rhetoric has continued to be hawkish overall.

Boston Fed President Susan Collins said overnight that bringing inflation back down to 2 percent is the Fed’s “Job One,” while Fed Vice Chair Lael Brainard said tight monetary policy will continue “for as long as it takes to get inflation down.”

Money markets lay 79 percent odds that the Fed will hike by another 75 basis points at this month’s meeting, which would increase the fed funds rate to 3.0 percent to 3.25 percent.

“Dollar domination may have one last major rally in it before the market can start placing some long-term bets with some of the European currencies,” wrote Edward Moya, a senior markets analyst at OANDA, in a note.

“The upcoming ECB rate decision will be a make-or-break moment in FX that will either trigger a bounce towards parity or provide a clear passage towards 0.9750.”

Japan’s yen showed some resilience on Thursday, trading little changed at 143.815 per dollar, after reaching a 24-year low of 144.99 in the previous session.

The yen has been a particular victim of recent dollar strength, partly due to its sensitivity to rising long-term U.S. yields as hawkish Fed bets ramped up.

It tumbled more than 3 percent over the past two sessions to take it to its trough just shy of 145 yen per dollar, leading Japan’s Chief Cabinet Secretary Hirokazu Matsuno to say that the government would like to take necessary steps if “rapid, one-sided” moves in currency markets continue.

Meanwhile, the Aussie tumbled 0.7 percent to $0.6721 and dipped as low as $0.6713 earlier, after RBA Governor Lowe said in a speech “the case for a slower pace of increase in interest rates becomes stronger as the level of the cash rate rises.”