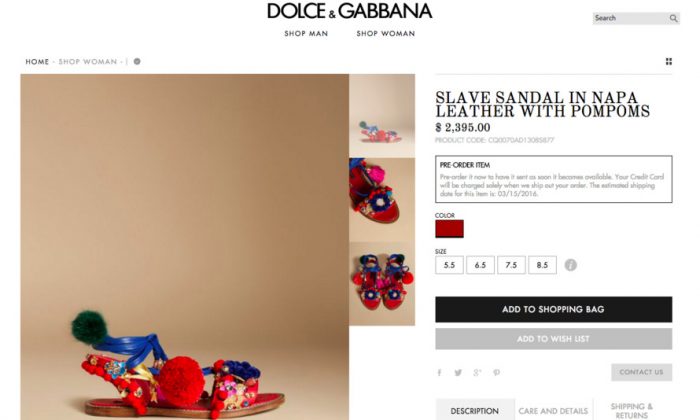 Dolce & Gabbana, the Italian fashion house, is being criticized for selling “Slave Sandals.”

The item, which is multi-colored and features pom-poms is available on the company’s website for $2,395.

It was recently placed under the Spring Summer ’16 collection. The company has since renamed it to “Decorative Flat Sandal,” according to Mashable.

The sandals were available at Saks Fifth Avenue and Moda Operandi under the “Pom Pom Leather Lace-Up Sandal” and “Pom Pom Wrap Around Sandal” names.

On social media websites, users said the name is insensitive.

Wrote one person on Facebook: “They can make a ‘slave sandal’ but will they ever know what it was truly like for our people to wear them?”

Added another: “They coulda named their sandals anything but why call them slave sandals? But yall love supporting these racist designers tho! Not me.” (sic)

However, a number of people lamented that political correctness has gone too far in society.

The designers behind Dolce & Gabbana are just racist. This is the second this has happened. 1st, the “Mammy” earrings, now “Slave” sandals.

“These are some ugly shoes that my toddler could create with some pom poms and glue. But to freak out that they called them slave sandals? Think beyond your own little America centered view people! There is a WHOLE other world out there and they sometimes call gladiator sandals slave sandals,” one person wrote. “D&G is an Italian brand and the plight of African slaves in America is probably about as much on their radar as the plight of Roman slaves on most American’s radar.”

Your Next Cup of Tea Could Be Supporting Child Slavery

Added another “I see a lot of people on my timeline outraged at this. All of them black. All I can think is since when did black people own the word slavery? Get to know history, people of all ethnicities have been enslaved at one point.” (sic)