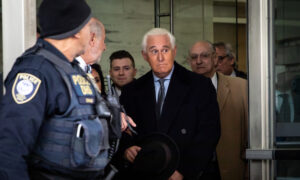 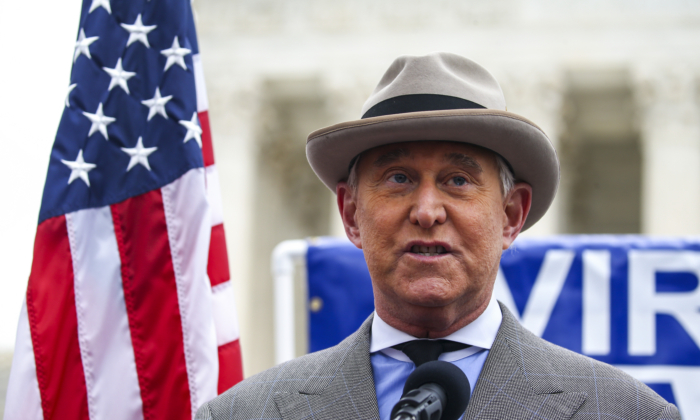 The Department of Justice on April 16 filed a lawsuit against veteran political operative Roger Stone and his wife to recover nearly $2 million in unpaid taxes and interest.

The lawsuit was filed in federal court in Fort Lauderdale, Florida. The action was requested and authorized by the chief counsel of the Internal Revenue Service and commenced at the direction of Attorney General Merrick Garland.

According to the lawsuit (pdf), Stone and his wife, Nydia Stone, filed tax returns in each of the years 2007 through 2011 but didn’t pay the amount reported as due. The non-payments, late payment fees, and interest amounted to $1,590,361, the government alleges. Stone also failed to pay $407,036 in taxes for the year 2018, the lawsuit claims.

“The Internal Revenue Service is well aware of the fact that my three-year battle for freedom against the corrupted Mueller investigation has left me destitute,” Stone told The Associated Press. “They’re well aware that I have no assets and that their lawsuit is politically motivated. It’s particularly interesting that my tax attorneys were not told of this action, filed at the close of business on a Friday.

“The American people will learn, in court, that I am on the verge of bankruptcy and that there are no assets for the government to take.”

The Stones also are charged with using an alter-ego entity, Drake Ventures, to funnel more than $1 million to outside bank accounts in an attempt to frustrate IRS collection efforts. According to the lawsuit, the Stones used the Drake Ventures bank accounts to pay for personal expenses, including groceries and dentist bills, as well as some $500,000 in tax liabilities.

“Although they used funds held in Drake Ventures accounts to pay some of their taxes, the Stones’ use of Drake Ventures to hold their funds allowed them to shield their personal income from enforced collection and fund a lavish lifestyle despite owing nearly $2 million in unpaid taxes, interest, and penalties,” the lawsuit states.

The Stones were in compliance with an installment payment arrangement with the IRS until March 28, 2019, when they failed to make a payment of $19,485. The IRS terminated its installment agreement thereafter. Two months prior to missing the payment, Stone was indicted in connection with the special counsel’s Russia investigation.

After Stone was indicted and prior to missing the installment payment, the Stones shifted money from Drake Ventures to another entity, Bertran Trust, and purchased a residence.

Stone was convicted of process crimes by special counsel Robert Mueller—namely, lying to Congress, tampering with a witness, and obstructing the House’s Russia investigation. Trump commuted Stone’s sentence and eventually pardoned him. The special counsel investigation concluded finding no evidence of collusion between the Trump campaign and Russia.