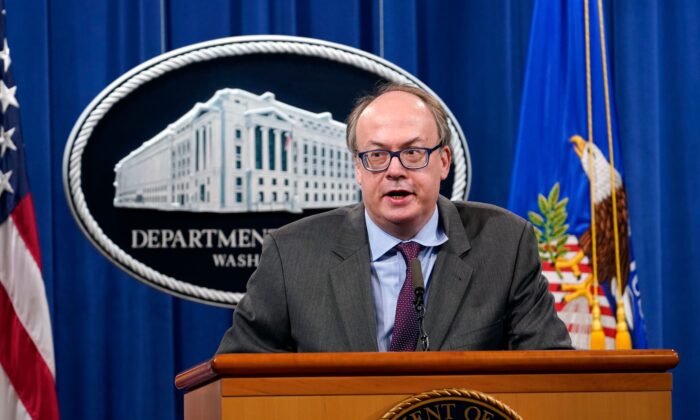 Jeffrey Clark, assistant attorney general for the Department of Justice's Environment and Natural Resources Division, speaks during a news conference in Washington in a Sept. 14, 2020, file photograph. (Susan Walsh/Pool/AFP via Getty Images)
US News

The search warrant executed at the home of a former top Department of Justice (DOJ) official in June was part of an investigation into violations of three federal laws, including obstruction of justice, according to a newly disclosed filing.

Jeffrey Clark, an assistant attorney general during the Trump administration, told the District of Columbia Court of Appeals Board on Professional Responsibility that federal agents with the DOJ inspector general’s office raided his home in Washington on June 20 “in connection with an investigation into violations” of laws prohibiting making false statements to the government, conspiracy, and obstruction of justice.

The board  disclosed the statement in a report, dated Sept. 12 and originally filed under seal, on charges it has leveled against Clark.

Clark declined to comment. He previously told NTD that he hadn’t seen the affidavit upon which the search was based.

“The new era of criminalizing politics is worsening in the U.S.,” Russ Vought, president of the Center for Renewing America, where Clark is a fellow, told The Epoch Times in an email.

“This raid, which was just the beginning of their attempt to wipe out political opposition, entailed more than a dozen DOJ law enforcement officials searching Jeff Clark’s house in a pre-dawn raid, putting him in the streets in his pajamas, and taking his electronic devices.

“All because Jeff saw fit to want to investigate voter fraud. This is not America, folks. The weaponization of government must end. Let me be very clear. We stand by Jeff and so must all patriots in this country,” Vought wrote.

Board officials say he violated the District of Columbia rules of professional conduct by engaging in dishonest conduct when he helped draft a letter to Georgia’s governor and lawmakers in the state recommending they call a special session and send an alternate slate of electors to Washington after the 2020 presidential election. They also charge that he tried to interfere with the administration of justice.

Clark argued the case should be deferred but officials said in the new filing that he hasn’t met the standard, which is a pending related ongoing investigation or litigation.

Several probes apply, including the investigation that brought agents to his home, Clark said. But Merril Hirsh, chair of the D.C. Court of Appeals Board on Professional Responsibility, the disciplinary panel for the District of Columbia Court of Appeals, recommended Clark’s request be denied because Clark hasn’t been charged.

Correction: A previous version of this article inaccurately described what body released the report. It was the District of Columbia Court of Appeals Board on Professional Responsibility. The Epoch Times regrets the error.