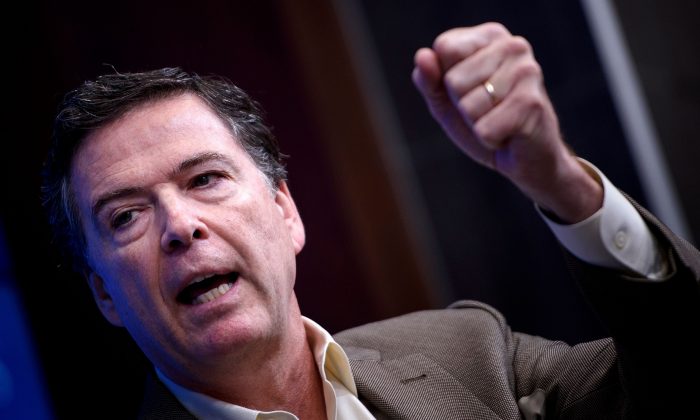 An investigation by the Department of Justice inspector general found that the FBI under then-Director James Comey broke protocol but did not show evidence of political bias in the investigation on Hillary Clinton’s use of a private email server.

The FBI had investigated whether Clinton and her aides had intentionally sent classified information using a private email server.

The IG in its report identified a strong bias on the part of some of the FBI agents, including the lead agent on the case Peter Strzok, but said that this bias did not influence the actual investigation.

Strzok and four other FBI agents were referred for a disciplinary investigation over the improper text messages they had sent.

Strzok was also the lead agent on the investigation of the Trump campaign for alleged collusion with Russia. The FBI’s handling of the collusion case was not included in the scope of this inspector general investigation.

The IG obtained 1.2 million documents and conducted more than 100 witness interviews in its investigation.

“There were clearly tensions and disagreements in a number of important areas between Midyear agents and prosecutors,” the IG wrote in the report. “However, we did not find documentary or testimonial evidence that improper considerations, including political bias, directly affected the specific investigative decisions we reviewed in Chapter Five, or that the justifications offered for these decisions were pretextual.”

“Midyear Exam” was the name used by the FBI for the investigation on the Clinton email server.

While the report may not have found political bias, the IG lists a series of examples of behavior inconsistent with standard DOJ procedure.

This includes the decision by Comey to announce on July 5, 2016, the results of the FBI’s investigation into Clinton’s sending of classified information.

In his announcement, Comey stated that Clinton had been “extremely careless” but that “my judgment is that no reasonable prosecutor would bring such a case.”

In its report, the IG said Comey’s action “was extraordinary and insubordinate.”

“We found none of his reasons to be a persuasive basis for deviating from well-established Department policies in a way intentionally designed to avoid supervision by Department leadership over his actions,” the report read.

The IG also criticized the FBI for its delay in acting on emails relevant to the investigation that were found on the laptop of Anthony Weiner, husband of Clinton’s close aide Huma Abedin.

The IG report reads, “We found that, by no later than September 29, FBI executives and the FBI Midyear team had learned virtually every fact that was cited by the FBI in late October as justification for obtaining the search warrant for the Weiner laptop, including that the laptop contained” over 340,000 emails, many associated with Clinton.

A portion of the 340,000 emails found on Weiner’s laptop came from domains associated with Clinton, including State.gov, ClintonFoundation.org, ClintonEmail.com, and HillaryClinton.com.

It also included numerous emails between Clinton and Abedin, some dating back to 2007 and covering the entire period of Clinton’s tenure as secretary of state.

In its report, the IG found the FBI’s explanations for not acting sooner on the new evidence “to be unpersuasive justifications.”

The inspector general was also concerned by the fact that the FBI prioritized the Russia investigation over the follow-up to the Clinton email investigation.

“We were particularly concerned about text messages sent by Strzok and Page that potentially indicated or created the appearance that investigative decisions they made were impacted by bias or improper considerations,” the report says.

The IG said it was particularly concerned about a text message sent by Strzok to FBI lawyer Lisa Page on Aug. 8 in which he said “we’ll stop” candidate Trump from being elected.

“Under these circumstances, we did not have confidence that Strzok’s decision to prioritize the Russia investigation over following up on the Midyear-related investigative lead discovered on the Weiner laptop was free from bias,” the IG said in the report.

FBI Director Christopher Wray said that his agency accepts all of the findings by the IG. It also said that conduct investigations have been ordered, and if wrongdoing is found, the individuals will be held accountable.

He also said that there will be training at all levels of the FBI, to avoid the appearance of bias, and also make sure all agents are in line with DOJ policies on public statements and contacts with the media.

“The OIG report makes clear we have work to do,” Wray said.