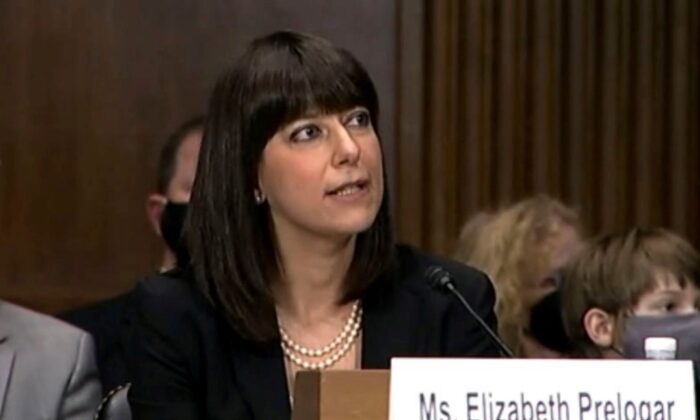 The Justice Department has waived ethics rules to allow Solicitor General Elizabeth Prelogar to work on a number of high-profile cases before the Supreme Court that could have huge implications for abortion and gun rights laws, according to documents filed with the Office of Government Ethics.

Prelogar, who is the federal government’s chief advocate before the Supreme Court, was granted ethics waivers that would allow her to work on five Supreme Court cases involving her former law firm, Cooley LLP, or its clients.

Specifically, the waivers allow her to work on the Students for Fair Admissions Inc. v. President and Fellows of Harvard College case, despite her having earlier served as a guest lecturer at the law school.

The case pertains to a nonprofit called Students for Fair Admissions which disagrees with how Harvard uses race to determine which applicants to admit and is seeking to overturn the admissions policy.

Harvard has acknowledged that they use race as a factor in admission decisions, but say that such consideration doesn’t violate federal law or the Constitution.

In the Harvard case, Prelogar submitted a brief siding with the University.

The Justice Department said in its Nov. 18 waiver regarding the Harvard College case that Prelogar has “unique qualifications to meet the government’s needs in this particular matter” as a veteran appellate lawyer whose career includes both public and private service.

Dobbs v. Jackson Women’s Health Organization, the only remaining abortion clinic in Mississippi, asks the Supreme Court to determine whether the state’s ban on all elective abortions after 15 weeks of pregnancy is constitutional.

The abortion ban went into effect in Texas last September and will remain as such for the foreseeable future after a federal appeals court sent a case challenging the ban to the state’s Supreme Court earlier this month.

Prelogar joined oral arguments in December on behalf of Jackson Women’s Health Organization, acting as a “friend of the court.”

Prior to her being confirmed to her current position, Prelogar served on special counsel Robert S. Mueller III’s investigation of Russian alleged meddling in the 2016 election.

According to Protect the Public’s Trust, which tracks the Biden administration ethics waivers, “ethics responsibilities are an important aspect of public service” and such rules regarding ethics “ensure public officials are not using their positions of public trust for private gain for themselves or those around them, such as former employers.”

They also serve to maintain public confidence that the government is “not making decisions arbitrarily or based on inappropriate biases.”

Michael Chamberlain, a former Trump administration official who leads the group, told Axios, that the “DOJ appears to have a strikingly large volume of high-profile cases involving [Prelogar’s] former employers and clients.”

“Waivers normally arise because of skills, talents, and experience that are supremely unique,” Chamberlain said in an email to the publication. “Several of the waivers we’ve seen recently have been very broad and awarded to attorneys and former lobbyists, two professions of which there’s hardly a shortage in D.C.”

The Epoch Times has contacted The White House for comment. A spokesperson for the DOJ declined to comment.