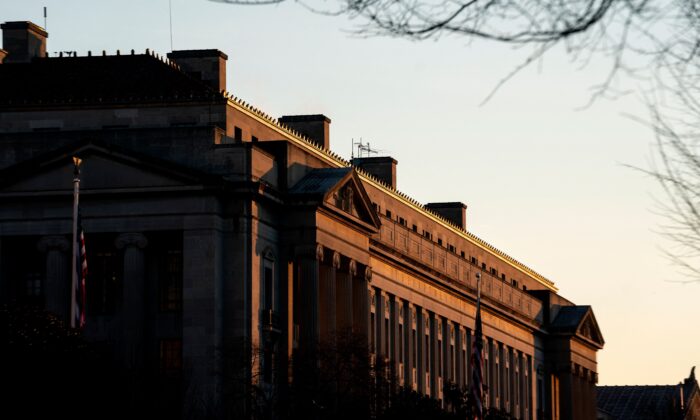 The Department of Justice (DOJ) building in Wash., on Feb. 1, 2022. (Stefani Reynolds/AFP via Getty Images)
Cryptocurrency

According to a U.S. Department of Justice (DOJ) statement, six people have been charged in cryptocurrency-related fraud cases, including Non-Fungible Token (NFT) scams.

DOJ has announced criminal charges against the Baller Ape Club NFT collection’s creator for involvement in the “rug pull” scam.

According to the report, after the first day Baller Ape Club NFTs were publicly sold, Tuan and his co-conspirators engaged in what is known as a “rug pull,” ending the purported investment project, deleting its website, and stealing the investors’ money.

He then converted the money into different cryptocurrencies and moved them across multiple blockchains. If convicted, Traun may face up to 40 years in prison.

Last year, the NFT market generated $25 billion in sales. However, the DOJ did not prosecute any single NFT fraud case.

“These cases serve as a crucial reminder that some con artists hide behind trendy buzzwords, but at the end of the day, they are simply seeking to separate people from their money,” said U.S. Attorney Tracy L. Wilkison for the Central District of California. “We will continue working with our law enforcement partners to educate and protect potential investors about traditional and trendy investments.”

The other cases reported by the DOJ include a cryptocurrency Ponzi scheme that raised almost $100 million and a fraudulent initial coin offering that stole $21 million from misled investors.

The department also reported a crypto commodities scheme where the offender promised 600 percent returns to investors. He wooed investors with meetings at Hollywood Hills homes he did not own, using a fake team of armed security guards to generate a false image of wealth and power.