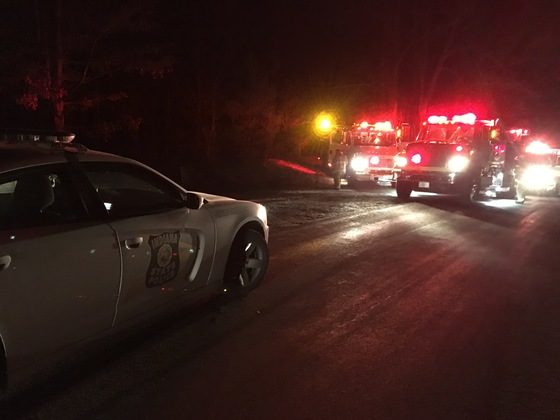 First responders on the scene of a small plane crash in Oldenburg, Ind., on Dec. 16, 2017. (Indiana State Police)
Crime and Incidents

Dog Survives Plane Crash That Killed 3 and Another Dog

Three people and a dog died in a plane crash in Indiana on Saturday, Dec. 16.

The small plane crashed in the woods near North Hamburg Road in Oldenburg, at about 9:10 p.m.

The crash was reported to Indiana State Police, who also learned a plane has disappeared from the radar of Cincinnati Air Traffic Control.

When police officers arrived, they found a fire ignited by the burning wreckage in dense woods. Firefighters arrived at the scene and put it out.

Four bodies were found—three people and one dog.

Another dog, however, miraculously survived the crash and was found at a nearby residence.

“The dog was taken to a local veterinarian to be treated for injuries,” the Indiana State Police stated in a release.

The Franklin County Coroner’s Office is performing autopsies on the bodies and will attempt to confirm their identities.

“I don’t know whether they’ll have enough to positively identify the people yet on the autopsies. They were getting some dental records to compare,” said Sgt. Stephen Wheeles, Indiana State Police public information officer for the Versailles District.

Wheeles had no information on the whereabouts or condition of the surviving dog. He said a Greensburg Police Department officer took it to a veterinarian in Greensburg.

An inquiry about the dog to the Greensburg Police Department went unanswered.

The plane was a private single-engine Cessna T210M Turbo Centurion that, according to FlightRadar, took off from Frederick, Maryland, on Saturday around 7:22 a.m., took a journey to Kansas City and, according to police, was to return to Frederick that day.

It flew from Frederick to Columbus, Indiana, then to Lawrence, Kansas, from where it was transported, likely on the ground, 40 miles to Kansas City. It took off from Kansas City’s Charles B. Wheeler Downtown Airport at about 4 p.m. and again made a stop in Columbus. It took off again at about 8:42 p.m., but after 10 minutes of flight it started to steer north off its course and lose altitude. Then, at about 8:54 p.m. it abruptly turned north and, rapidly losing altitude, continued for about 3.5 miles. Then the transponder signal was lost.

The plane crashed only about two miles from the small KHLB Batesville Airport. It is not clear if the pilot attempted an emergency landing at the airport.

The Indiana State Police stated it’s conducting a joint investigation with the Federal Aviation Administration and the National Transportation Safety Board.

“The investigation is ongoing and may take weeks to complete,” the police statement read.