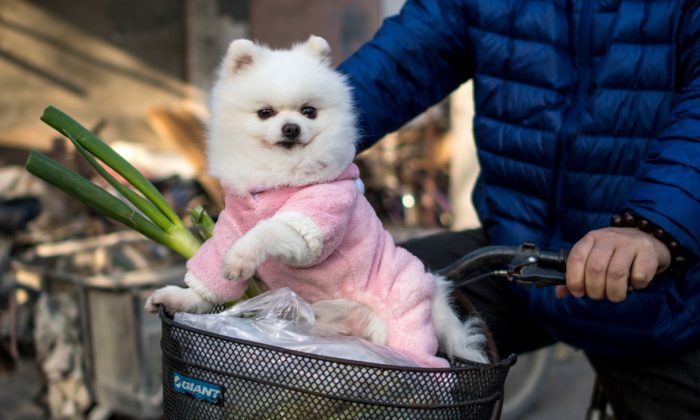 A small dog survived a fall from the sixth floor of a residential building after it crashed onto the windshield of a car below. Before the dog fell, witnesses said they heard arguing in the household, according to Chinese state-sponsored media The Beijing News.

Surprisingly, the dog got up and was able to hobble away from the car on its own, according to Chinese online news outlet Pear Videos. An unnamed woman, who was supposedly the dog’s owner, came to get it soon after it was on the ground, and quickly left the scene.

One of the witnesses, surnamed Chen, said that the dog owner had swollen eyes and bruises on her face, according to The Beijing News.

The woman was also wearing a cloth mask, possibly to cover injuries. However, these masks are a common sight in some Asian countries.

“The sound was extraordinarily loud,” one witness told Pear Videos. “The dog was having spasms there after it hit [the car].”

“The dog’s mouth was dripping with blood,” he said.

Along with the dog, a mirror crashed on the hood of the same car before it shattered on the ground.

“A dog fell down, and along with it, a mirror about that size, it was about 20 inches (50 centimeters) long,” one witness told Pear Videos. “The stuff fell from the sixth floor down onto the second floor.”

“It knocked a big dent into my air conditioning unit.”

The witness then said the dog knocked off his metal clothes line as it fell from the window, before landing on the car.

No one was injured by the falling dog or mirror. The pup’s impact left a crack on half of the car’s windshield. The woman agreed to pay 6,000 yuan ($870) in compensation for car repairs.

Chen said that he heard people arguing in the building before the dog and mirror fell to the ground, according to The Beijing News.

But the dog owner denied any wrongdoing. “It’s really misbehaved, it jumped out the window,” she said, according to Pear Videos.

She went on to say that there wasn’t an argument, according to The Beijing News.

However, witnesses and many social media users who commented on the incident believe that the dog was thrown out of the window over the argument, The Beijing News reported.