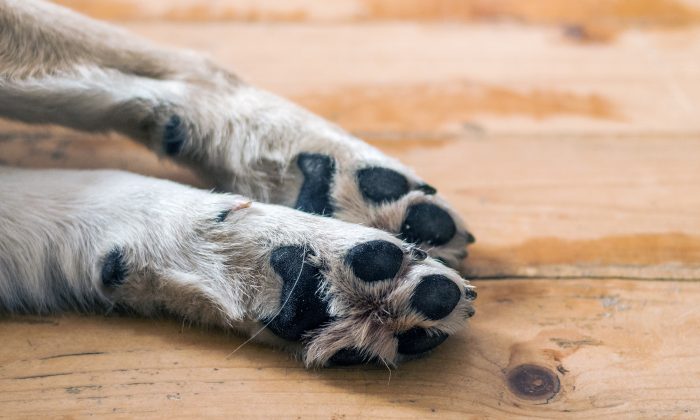 Warning: Photos are graphic and may be disturbing to some readers.

A dog was found buried alive on a beach in Oahu, Hawaii, before it was rescued.

Rescue group PAWS of Hawaii said it was notified by a bystander who saw a man burying the dog in the sand last week, according to a Facebook post.

The group came and dug the animal out, noting that the dog, named Leialoha, was “incredibly swollen, sunburned and missing 90% of her fur.”

“This beautiful girl was found by one of our team members. Someone had just buried her and they had a machete so who knows what was next,” it added.

The dog now has a new foster owner, said PAWS in an update on July 13.

“Earlier this week, I was scrolling FB, while the girls were getting haircuts and saw that there was a dog on the westside of Oahu that had been buried in the sand and been cut on her leg with a machete. She was badly sunburned, covered in sores, and missing most of her fur,” said a woman, Amanda, in the group’s Facebook post.

She added: “My heart was broken and I knew she needed us to foster her. Leialoha has come so far since Tuesday night. Initially, she would only leave her kennel to go to the bathroom. Last night, she came out, while we had friends over to see what was for dinner and has been liking being under the coffee table. She has a long way to go, but the worst is over.”

Ku’ulei Durand, the Executive Director of PAWS of Hawaii, told KITV that the person who buried the dog apparently thought her ailments were too severe.

“He felt he was ending her suffering by trying to end her life, instead of getting her the help she needed,” Durand said.

“Severe sunburn, lesions, swollen limbs in her extremities — that is a sign of being very dehydrated and very poor care,” she explained to the local news station.

Durand said that she had cuts on her paws that were possibly inflicted on her on the beach. “The man who buried her, we were led to believe, had started to cut her,” said Durand.

“Enforcement around animal laws is very difficult. Unless you have a video of the animal being abused, a picture and a report isn’t going to stick,” Durand added.

Rescuers in Ecorse, Michigan, said that a pit bull was discovered with burn marks all over its body, adding that a reward is being offered for any information about the case.

The Animal Resource Funding Foundation said in a July 9 Facebook post that Destiny, the dog, was burned by either cigarette butts, firecrackers, or chemicals.

“We are so disgusted with how much abuse that we are seeing. Tonight we took in this sweet girl who had burn marks all over her body, from either cigarette butts, firecrackers, or chemical burns,” the foundation wrote on Facebook, adding that a $1,000 reward is being offered for information leading to the arrest or conviction of a suspect in the case.

“All of her teeth are broken, most likely from trying to break away from her chain,” the group added, saying it named the dog Destiny.

Another Facebook page, The Last Stop Animal Rescue and Sanctuary, also chimed in.

Animal Cruelty in the United States

On Jan. 23, two Congressmen from Florida proposed a bipartisan bill that would make cruelty against animals a felony across the United States.

Fifty states across the United States currently have laws that prevent cruelty against animals, however, if animals get tortured across state lines, there is little to protect them.

According to the Humane Society, a non-profit dedicated to resolving animal welfare problems, the animals that are most often reported as abused are dogs, cats, horses, and livestock.

Intentional cruelty to animals is strongly correlated with other crimes, including violence against people. The Humane Society says that surveys have suggested that those who intentionally abuse animals are mainly men under 30.