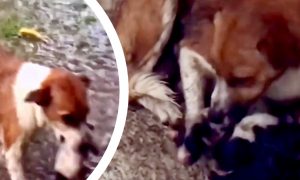 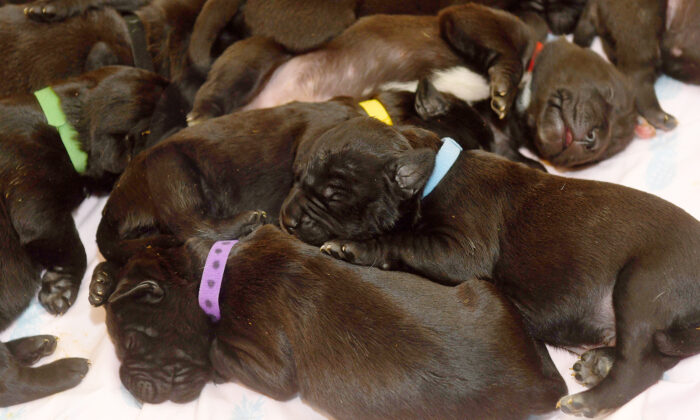 A British dog could have set a new world record after giving birth naturally to a staggering litter of 21 puppies.

Joanne Hine, the owner, watched in amazement as her Great Dane and American bulldog cross, Mary Jane (MJ), popped out the astonishing brood.

Joanne, who is from the Isle of Man, had initially been told her pet would give birth to six to eight puppies. However, examination closer to MJ’s due date further revealed that the actual number was going to be much higher, a potential record breaker.

The current Guinness World Record for the largest litter of puppies stands at 24, born to a Neapolitan mastiff called Tia in Cambridgeshire in 2004. However, those puppies were born via cesarean section, while MJ’s litter was all natural—which Joanne thinks could mean a new record has been broken.

Joanne recalled: “When the vets told me it would probably be more after they’d said she would have just six to eight I said ‘no way!’

“I’m so proud of her. MJ did it all on her own with Annie and Ruth of Jane Callow Veterinary Practice by her side the whole time,” she further added. “MJ only has nine nipples and 14 pups so bottle feeding them every two hours is a team effort from us all.”

However, sadly, six of Joanne’s puppies were stillborn and one died soon after the birth on Nov. 20, 2019.

The remaining 14 puppies have been named after chocolate bars according to the ones that suit their personalities.

Joanne adores this litter of puppies and even sleeps in the kitchen next to a homemade crib, which is big enough for all 14 and their mother, to keep an eye on them. The majority of the dogs are yet to be rehomed, although two are soon being taken to a new family in Rotherham, Yorks.

All of them seem to have inherited their mother’s black and white color and the face of their father—a bull mastiff crossed with a rottweiler. The animals need to be fed every two hours, so Joanne is being supported by her dad, Steve, brother Matt, and friend Liam—who will soon become “dads” to the puppies.

Joanna also mentioned that MJ will now be neutered—as she’s read that a second litter can be bigger than the first.