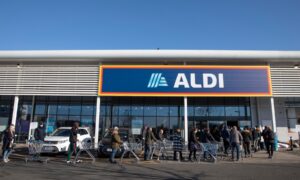 Dog Caged for 2 Years in UK With No Exercise: Reports

Police officers in Devon and Cornwall kept a dog in a cage for two years without exercise.

The dog, Stella, was seized in 2014 and kept in a small, 3-foot-by-9-foot cage in Devon since then, the BBC reported.

Devon and Cornwall Police didn’t say why the dog, a pitbull-like breed, was kept in the cage without exercise for such a long period of time. Officials determined the animal was potentially dangerous.

A worker at the kennel where Stella was being kept was told by police not to exercise dogs held under the Dangerous Dogs Act.

According to the Independent, the Royal Society for the Prevention of Cruelty to Animals guidelines covering the welfare of seized dogs say they “must have daily access to outdoorsafe and secure areas, away from the kennel area and this should be for at least 30 minutes per day.”

Laura Khanlarian worked as an assistant at the private kennel used by Cornwall Police.

“We were always told not to exercise or go into a kennel with any dogs, regardless of character, that had been brought in under the Dangerous Dogs Act,” she told the BBC. “We were under no circumstances allowed to touch any of those dogs—which was hard.”

“Animal welfare comes before anything, and that was my job. I don’t believe I would be doing it properly if I would sit back and think that’s OK. It wasn’t OK—it’s not OK.”

Around three weeks ago, Khanlarian posted an update on her Facebook describing a “most disgusting heart wrenching pain” because “so many people are responsible for the welfare of England’s dogs and yet so many show no real care or responsibility.”

“You run free on those pretty feet my STELLA BLUE!” she wrote, alongside a picture of the dog.

But the BBC reported that a final court ruling issued a destruction order for Stella.

Devon and Cornwall Police have not issued a statement on the matter.