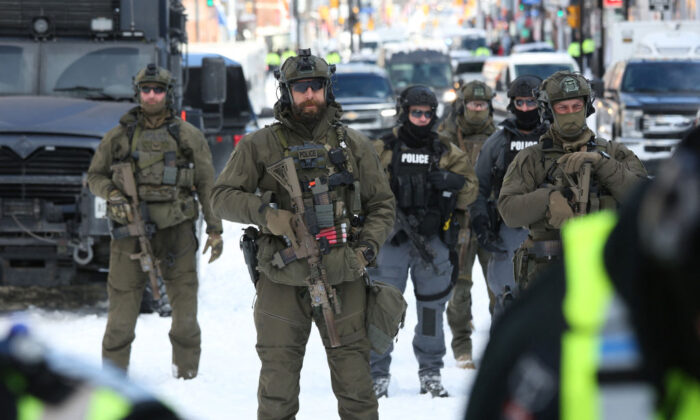 MPs grilled Public Safety Minister Marco Mendicino on Feb. 25 at a House committee hearing to examine the public order emergency declared by the government, with some focusing on whether the threshold had been met to call a national emergency, and others looking to find out why the Ottawa occupation lasted so long.

Addressing whether the threshold was met to invoke the Emergencies Act on Feb. 14, Conservative MP and public safety critic Raquel Dancho asked Mendicino if “our safety was in jeopardy with the protests in Ottawa?”

“Well certainly the size, scope, and scale of the illegal blockades at a number of borders and ports of entry, as well as the illegal occupation in Ottawa, met the threshold under the Emergencies Act,” replied Mendicino as he testified before the House of Commons public safety committee.

Large-scale protests in Ottawa, dubbed the “Freedom Convoy,” along with Canada-U.S. border blockades had occurred across the country in recent weeks to demand the lifting of COVID-19 mandates and restrictions. Most of the blockades were cleared before the government invoked the act, and the one in Emerson, Manitoba, dispersed on its own on Feb. 16, so Dancho focused on the Ottawa protest.

“I walked to West Block for two weeks past these protests. If there was such a threat to public safety, how could you have allowed members of Parliament to walk by that protest every day?,” asked Dancho.

Dancho also said Mendicino had previously “insinuated” there were links between the protest organizers in Ottawa and several protesters arrested at the Coutts, Alberta, border who have been charged with conspiracy to commit murder.

“So again, do you believe that there was a threat to public safety in Ottawa?” asked Dancho.

Without directly addressing his own allegation about the links, Mendicino responded that “those aren’t just my insinuations. Hundreds of charges and arrests have been carried out by law enforcement throughout the course of the illegal blockades—not only in Ottawa, but as well as in Alberta and British Columbia.”

Pressed again about the evidence of links, Mendicino said those comments related to “a number of public reports.”

Mendicino said organizers and leaders of the movement have publicly made statements calling for the overthrow of the government with violence and “through the use of bullets.”

The minister was likely referring to Pat King, who in a video posted online and supposedly dated Dec. 16, 2021, said “the only way this is going to be solved is with bullets.” It’s unclear what “this” refers to in the video.

The main organizers of the Freedom Convoy had distanced themselves from King and said their movement is peaceful.

“I just don’t understand how you could be saying, on one hand, there’s all these strong ties and this is a national emergency for public safety, and I walked every day by these protests. It just doesn’t really add up at all,” repeated Dancho.

While King has expressed extreme views, the Ottawa protest was peaceful throughout, with multiple dance parties and a children’s area with bouncy castles. But Ottawa residents have also complained about noise due to constant honking and also of harassment.

Liberal MP Taleeb Noormohamed asked Mendicino why it took so long for the federal government to intervene, and Mendicino defended his government’s efforts by saying it had sent three batches of RMCP reinforcements.

Noormohamed also asked RCMP Commissioner Brenda Lucki why her organization did not “go in there and clear everything out on the first day in Ottawa.”

Lucki responded that the Ottawa Police Service is responsible for the jurisdiction and that if it needs assistance, then under Ontario’s Police Services Act the first request should go to the Ontario Provincial Police.

NDP MP Alistair MacGregor pressed Mendicino on whether Ottawa Mayor Jim Watson or Ontario Premier Doug Ford had expressly requested that the federal government invoke the Emergencies Act, with both leaders having themselves declared emergencies a few days apart in their respective jurisdictions.

As Mendicino continued to avoid answering directly, MacGregor told him, “With respect, Minister, I just need a ‘yes’ or ‘no’ please.”

Mendicino never provided an answer in the end, only saying that Ottawa and Ontario had expressed challenges dealing with the existing authorities on the issue.

Dancho also questioned department officials on whether the existing powers would have been sufficient to handle the issue without resorting to declaration of a public order emergency.

Samantha Maislin Dickson, assistant deputy minister at Justice Canada, said the question is not whether existing laws are available but whether they are effective.

“And so the determination as I understand that was made, was that the effectiveness of any statute that may have been on the books to potentially deal with it was not available at the time the declaration was issued,” said Dickson.

These included making it illegal for people to participate in a designated assembly, being able to compel the provision of services (in this case this power was used to force reluctant towing companies to remove the trucks), as well as imposing financial measures, which were used to freeze bank accounts without a court order.

The next steps in reviewing the use of the Emergencies Act will include forming a dedicated parliamentary committee and launching an inquiry into the act’s declaration and the events leading up to its use.