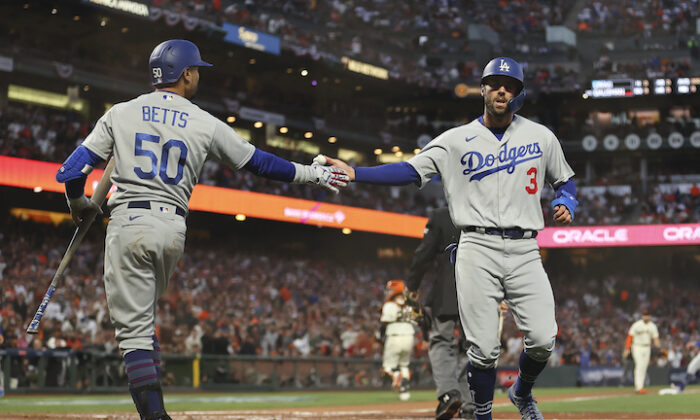 Los Angeles Dodgers’ Chris Taylor (3) is congratulated by Mookie Betts (50) after scoring against the San Francisco Giants during the second inning of Game 2 of a baseball National League Division Series in San Francisco on Oct. 9, 2021. (AP Photo/John Hefti)
Southern California

Game 2 of the National League Division Series (NLDS) returned to Oracle Park, San Francisco, with an attendance of 42,275.

Dodgers skipper, Dave Roberts, said earlier in the day, “We’re going to play this game essentially like a do or die.”

Dodgers’ starter, Julio Urías, kept the Giants in check by giving up just one run on three hits in five-plus innings of work. Urías struck out five and allowed just one walk. He was unbeaten in his last 17 regular-season games, finishing the season with an impressive record of 20-3.

His counterpart for the Giants, Kevin Gausman, battled to keep the game close after giving up two runs in the second. Urías hit a line drive opening RBI to right field, with Chris Taylor scoring from second, and AJ Pollock moved to third. With two outs, Mookie Betts hit a hard liner to left field allowing Pollock to score, and L.A. jumped on top 2-0 in the middle of the second inning.

The Giants countered as Urías walked Wilmer Flores to begin the bottom of the second. Video replay showed Urías’s last pitch may have landed in the strike zone but was called ball four. Flores moved to third base following Brandon Crawford’s single and Evan Longoria’s fly ball. Donovan Solano then hit a fly to center, scoring Flores. The Dodgers led 2-1 at the end of two innings.

The Dodgers slowly wore down Gausman until he was relieved in the top of the sixth inning after giving up a double to Trea Turner and a walk to Will Smith. Enter Giants’ reliever, Dominic Leone. He proceeded to allow back-to-back doubles to Cody Bellinger and AJ Pollock. The Dodgers increased their score to 6 runs, with the Giants gaining a run at the bottom of the six to make it 6-2.

The Giants brought in another reliever, Zack Littell, in the eighth inning, and the Dodgers’ Smith added a home run of 388 feet. Another run was scored by Pollock in the eighth inning. It came from Seager’s single to center and brought the score to 9-2.

A number of adjustments were made by the Dodgers for Game 2. Roberts changed the starting line-up to return Bellinger to first base and All-Star Chris Taylor to center field. This was the late game line-up that won Wednesday’s wildcard game against the St. Louis Cardinals. These two players had their struggles this year from either injuries or batting slumps. However, they helped the Dodgers win the World Series last year, so Roberts trusted them to come through once more.

The Dodgers finished the game with 11 hits while giving up six hits to the Giants.

Roberts said following the game, “It’s a good feeling. It’s interesting how the narrative changes from game to game. Right now, it’s a three-game series, we have home-field advantage and we have Max [Scherzer] on the mound. I like where we’re at.”

Game 3 moves to Dodger Stadium on Monday at 6:30 pm Pacific Time on TBS.