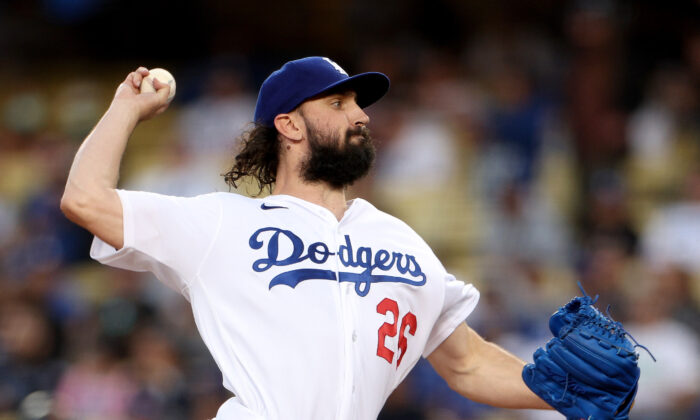 Tony Gonsolin #26 of the Los Angeles Dodgers pitches against the Arizona Diamondbacks during the second inning at Dodger Stadium, in Los Angeles, on May 16, 2022. (Harry How/Getty Images)
Baseball

Dodgers Rally and Hold Off Diamondbacks in 5–4 Win

The Los Angeles Dodgers (22–12) came from behind and held off a late rally by the Arizona Diamondbacks (18–18) to a 5–4 victory Monday night at Dodgers Stadium.

The Dodgers maintain a half game lead in the National League West, 12–5 at home, over their southern neighbor San Diego Padres.

Dodgers starter Tony Gonsolin pitched six innings giving up three hits and two runs, and Chris Taylor hit a two-run homer in the victory over their old rival Madison Bumgarner (2–2)—who was recently traded from San Francisco to Arizona.

Gonsolin is currently leading the Dodgers with the lowest ERA of 1.64.

“That’s something that Major League starters take pride in,” said manager Dave Roberts. “Having Clayton [Kershaw] as a mentor has kind of been the finishing touches” to Gonsolin’s success this year.

The 28-year old right-hander, Gonsolin, remains undefeated with a 4–0 record and has 30 total strike-outs and a WHIP of 1.03.

“This had to be one of the top [performances] he’s had,” said Dodgers manager Dave Roberts. “For him to give us six innings and be efficient at it was really impressive. I think this is, for his maturation as a big league ballplayer, this is a defining moment. This is a big one. He came through big.”

Of 92 career-high pitches, Gonsolin gave up a solo home run to Christian Walker in the second inning, but retired the side in order in three of the six innings pitched.

“Anything to give our bullpen a break,” said Gonsolin. “I was fortunate enough to get those few days off in between starts. So take advantage of those and then give my best effort every time I get to go out.”

Gonsolin grew up in Vacaville, California and played at Vacaville High School, registering a 4–1 record his senior year and a 2.60 ERA.

The Dodgers drafted Gonsolin in the ninth round in the 2016 MLB draft, following a college career at St. Mary’s College of California where he compiled a 3–3 record his senior year with a 3.86 ERA in 18 games.

Gonoslin made his debut in the majors on June 26, 2019 having begun the year in the minors with the Oklahoma City Dodgers.

“He got hit in the mouth,” said Roberts of the Walker home run. “And then every fastball I saw from him was with conviction. There was efficiency, there was really having good command of his entire pitch mix tonight.”

Following the second inning home run, the Diamondbacks added a run in the second following a Ketel Marte double to shallow left field. An error by shortstop Trey Turner then allowed Christian Walker to first and Marte to third base.

Josh Rojas hit a RBI sacrifice fly to right field to score Marte for a 2–0 lead.

But a fielding error by Arizona allowed Barnes and Taylor to score, and Betts went to third. Betts has hit in 14 of his last 16 games.

Freddie Freeman then doubled to left for a RBI bringing home Betts to take the lead 3–2.

Max Muncy bunted for a base hit in the sixth inning, followed by Taylor’s two-run shot of 379 feet over the right wall to give the Dodgers a needed 5–2 cushion.

Arizona rallied in the ninth scoring two runs off of Craig Kimbrel after giving up a single to Rojas and a 376 feet home run to David Peralta—before closing out with a strikeout of Geraldo Perdomo and a ground out by Alex Thomas for a 5–4 final.