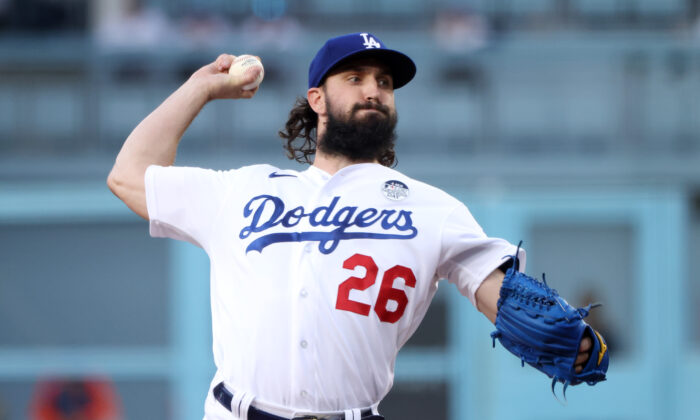 Tony Gonsolin #26 of the Los Angeles Dodgers delivers a pitch against the New York Mets during the first inning at Dodger Stadium, in Los Angeles, on June 2, 2022. (Katelyn Mulcahy/Getty Images)
Baseball

In a match-up between the top two teams in MLB, the Los Angeles Dodgers (34–17) shut out the New York Mets (35–18) at Dodger Stadium, 2-0, on Thursday night—ending New York’s six-game winning streak, and snapping the Dodgers’ three game losing streak.

In his 10th start of the season, Dodgers pitcher Tony Gonsolin would finish with his fourth consecutive six innings pitched per game.

Previously, he had not allowed more than two earned runs in a game. In his first career start against the Mets, Gonsolin allowed just two hits and one walk—while striking out five, and ultimately improving his record to 6-0.

“Just a little more nervous honestly going into it knowing they’re a good offense,” said Gonsolin at a press conference.

“I think he’s finally getting some of the recognition he deserves,” said Dodgers left outfielder Chris Taylor at the press conference.

While Taylor’s catch of Starling Marte’s line drive in the fourth inning was ruled illegal, the Dodgers challenged the call and won, saving the shutout, as Gonsolin would give up his first hit of the game to the next batter Luis Guillorme.

“Wasn’t really throwing anything off speed for strikes. The fastball ultimately was the savior,” added Gonsolin. “It’s a good feeling that I can go out there without my best stuff and rely on the defense and let them make great plays like they always do.”

Taylor scored the Dodgers’ first run after getting a single in the bottom of the fifth inning against Mets starter, Taijuan Walker, followed by Gavin Lux’s single to advance Taylor to third base.

Mookie Betts added another RBI with a single to center field to score Taylor, ending the Mets consecutive shutout innings streak at 26. Betts went 2-for-4 on the night and continues to lead the team with a batting average of .310.

Trea Turner, who leads MLB with a 25-game hitting streak, hit a double into the left-field in the sixth inning, resulting in the Dodgers’ second run after Justin Turner’s RBI double allowed T. Turner to score.

The Mets added just one additional hit with a single by Jeff McNeil against Dodgers reliever Brusdar Graterol in the seventh. Daniel Hudson pitched the eight, and Craig Kimbrel retired the side in the ninth, for his 11th save and the Dodgers’ fourth shutout.

Mets starter Walker lost his first game of the season after winning three—allowing two runs and seven hits in 5 2/3 inning while striking out two and walking one.