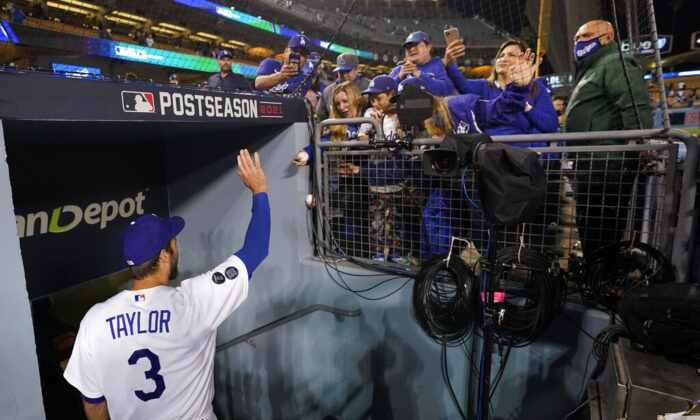 LOS ANGELES—Dodgers Chris Taylor is the first to hit three postseason home runs in an elimination game. It’s only happened 11 other times that three home runs were hit in a postseason game.

Taylor had a total of four hits and drove in six runs in Thursday’s Game 5 of the NLCS. The Dodgers fans had not seen much of the high-powered offense of the Dodgers in the postseason. But the over 51,000 faithful were treated with a sensational 11 runs from 17 hits.

The offense was needed early to recover from Dodgers pitcher, Joe Kelly, giving up a two-run homer in the first inning to Freddie Freeman, with Ozzie Albies on first. As a relief pitcher, Kelly started the “bullpen” game, piecing together relief pitchers to work the entire game to allow the usual four starters to have much needed rest in between starts. Kelly was soon relieved with tightness in his right-throwing bicep. Up to this point, he had pitched a total of 2 1/3 relief innings while not allowing any runs in this series.

All-Star Chris Taylor had struggled in the second half of the season but has come through big in elimination games. The first was against St. Louis where he hit a walk-off home run in the bottom of the ninth allowing the Dodgers to advance to the NLDS.

When TBS asked Taylor how he was able to do it, he said, “It’s new to me too, it’s kinda surreal. I’m just trying to stay within myself … not thinking too much. I think mechanically I’m in a better place. I was kinda grinding there for the last couple of months in the regular season, and finally worked through some things; and once you get a couple of hits, the confidence comes.”

When asked about his humble giggling at curtain call after a homerun, Taylor said, “I never look cool doing anything.”

Taylor’s first homerun was in the second inning driving in Albert Pujols to take a 3–2 lead. It was preceded by AJ Pollock’s homer that began the inning. Pollock also hit a home run in the eighth inning, finishing with three runs, three hits, and four runs batted in. The first four runs came off of Braves starter Max Fried, a native of Southern California.

Taylor also hit a single in the third scoring Pollock. The other two hits were homers in the fifth and seventh innings. He finished with three runs, four hits, and six RBIs.

Taylor said, “It’s definitely a surreal feeling for me. “I never thought I was going to hit three homers in a game, let alone a postseason game, and it just still hasn’t really sunk in.”

This performance may have given him great bargaining power as his contract expires at the end of the season.

Other Dodgers contributors include Trea Turner scoring a run, with three hits and an RBI. Pujols scored twice and had two hits. Cody Bellinger had three hits. Mookie Betts and Corey Seager both scored a run, with one hit.

The defending World Series Dodgers have staved off seven elimination games since winning the championship last year. They were also down 2–0 and 3–1 games to the same Braves last year in the NLCS.

Dodgers Manager, Dave Roberts, added, “I guess when our backs are against the wall, we play our best and fight, but that’s just not an ideal spot to be in.”

The games last year were all played at a neutral site in Texas due to the CCP (Chinese Communist Party) virus lockdowns, also known as COVID-19. This year, the schedule returned to normal. The teams head to Atlanta for Game 6 scheduled for Saturday, Oct. 23, at 11:08 a.m. ET. If the Dodgers can win another elimination game, Game 7 will take place on Sunday at 1:38 p.m. ET.