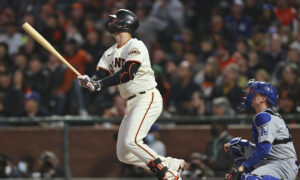 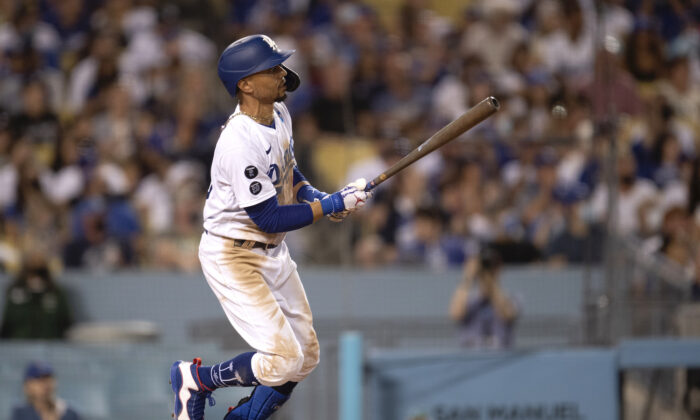 LOS ANGELES, California—The Los Angeles Dodgers found themselves in a must-win game four at Dodger Stadium against their biggest rival, the San Francisco Giants. The result was another explosive offensive performance that culminated in a 7–2 victory.

The four games have had two very polarizing outcomes. Games 1 and 3 resulted in the Giants victorious by stellar pitching and defensive performances, shutting out the Dodgers. Conversely, the Dodgers hitting was abundant in games 2 and 4, resulting in big scorelines favoring the Dodgers.

The Dodgers had 12 hits total, scoring in five of eight innings at-bat. Six of their starters had two hits. Mookie Betts, 2–4 batting, led the way with three RBIs and a home run in the fourth inning to increase their two-run lead to 4–0. Corey Seager was 2 for 5 at-bats, scoring in the first and eighth innings. Second baseman Trea Turner was also 2–5, with an RBI double in the first inning. Gavin Lux had two hits, two walks, and scored in the second inning. Cody Bellinger was successful in two of four attempts, scoring in the fifth. Will Smith, 2–4 batting, homered in the eighth inning with Corey Seager on first base to complete the scoring of 7–2.

The Dodgers ace, Walker Buehler, started on 3 days’ rest following the loss in game 1; and was able to get 13 outs in 4 1/3 innings. Following Monday’s loss in Game 3, he met with manager Dave Roberts and requested to start game 4 on short rest. Typically, pitchers have four days in between starts. This was a first for Buehler. His speed was not impacted; as Buehler’s velocity on his fastball increased by nearly one to 96.1 mph. He was charged with 1 run, allowing a single and a walk, before being relieved in the fifth inning. Joe Kelly took over for the remaining two outs of the inning.

Giants Buster Posey commented regarding Buehler’s performance, “He was attacking the zone. He was using four different pitches, getting them over for strikes, and expanded when he needed to. He just did a good job keeping us off-balance.”  The Dodgers also changed their shift on Posey, resulting in the slugger finishing without a hit. The Giants managed to score two runs on seven hits.

Dodgers Betts added, “I just know when our backs are against the wall, we got a guy named Walker Buehler that ends up getting us out of it. So he did it again today. But we got one more game.”

The two best records in baseball will meet one last time this season to determine the divisional winner and play for the National League Championship Series (NLCS). The Dodgers tied their best club record with 106 regular-season wins, while the Giants also set a club record with 107 wins.  They both currently have 109 total wins to include the playoffs. Game 5 shall return to the Bay on Thursday, for a “winner-take-all game” at Oracle Park.

“This is what baseball wants,” said Dodgers manager Roberts, “As I understand, all the series are done and so we’re going to be the only show in town. So if you have a pulse or you’re a sports fan, you better be watching Dodgers-Giants. It’s going to be a great one.”