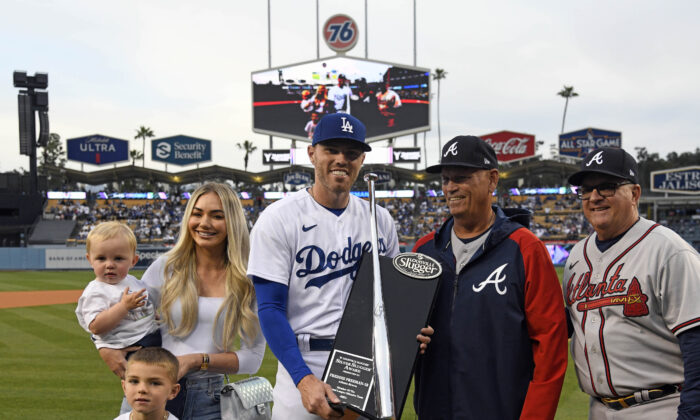 Freddie Freeman #5 of the Los Angeles Dodgers gets his 2021 Silver Slugger Award with his family, manager Brian Snitker #43 and hitting coach Kevin Seitzer #26 of the Atlanta Braves looking on prior to the start of the game at Dodger Stadium, in Los Angeles, Calif., on April 18, 2022. (Kevork Djansezian/Getty Images)
Baseball

In a match-up of the last two World Series Champions, the Los Angeles Dodgers (8–2) beat the Atlanta Braves (5–7) Monday night 7–4, as former Brave Freddie Freeman hit his first home run as a Dodger.

In front of the home sellout crowd of 52,052, Freeman heard the roaring chant of “Freddie, Freddie,” after his first inning homer of 386 feet over the left-center wall leading to the Dodgers seventh consecutive victory.

“Glad I got the first one out of the way,” said the 32-year-old. He added that he and Braves catcher Travis d’ Arnaud looked at one another as he came to the plate and both saying, “This is weird.”

An emotional Freeman spent time with the Braves before the game, visiting his old teammates and reminiscing about last year’s World Series.

Freeman was born in Fountain Valley, California, roughly 36 miles south of Dodger Stadium, and spent 12 years with the Braves after being drafted in 2007, following his college career at Cal State Fullerton.

Freeman was the heart and soul of the Braves, leading them to their first World Series Championship since 1995, as he received his first Babe Ruth Award and third consecutive Silver Slugger Award.

Freeman had made it clear that he desired to remain a Brave for his entire career, but was unable to come to an agreement in renewing his desired final contract of six years.

With difficulty in negotiations, the Braves moved away from Freeman and acquired Oakland A’s first baseman, Matt Olson, in an eight-year deal, leaving Freeman to return to Southern California with his desired six-year contract for $162 million.

Dodgers future Hall of Famers starter Clayton Kershaw won his second game of the season without a loss, following a no-hitter through seven innings last week in Minnesota.

Against the Braves, Kershaw became the second starting pitcher since 1960 to retire the most consecutive batters to start a season with 23 in a row.

Kershaw would give up one run in the 5th inning, and was relieved by Brusdar Graterol in the 6th inning after giving up another two runs.

The Dodgers had built a lead of 6–0 after adding five runs in the 4th inning.

Following a double by Justin Turner and a single by Will Smith, Cody Bellinger got an RBI grounding out to first base.

Trea Turner then added a three-run double off of reliever Sean Newcomb for a six run lead.

Atlanta got on the board in the fifth with a home run by Guillermo Heredia, and another in the sixth off of Kershaw by Ozzie Albies of 421 feet.

The Braves managed two more runs in the sixth, but Dodgers Bellinger closed out the scoring with a home run in the 8th inning for a final of 7–4.

Dodgers’ career saves leader Kenley Jansen was honored with a standing ovation in his first return back to Dodger Stadium since signing a one-year deal with the Braves in March.