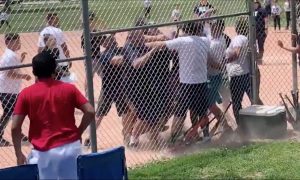 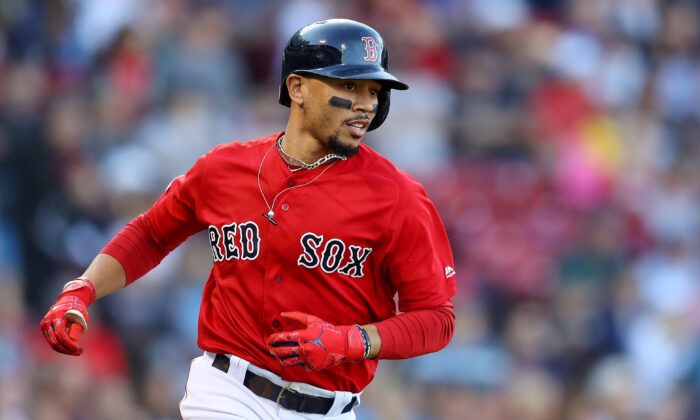 Mookie Betts #50 of the Boston Red Sox runs to first base during the fifth inning against the Baltimore Orioles at Fenway Park in Boston, Massachusetts on Sept. 29, 2019. (Maddie Meyer/Getty Images)
Southern California

Friedman also had to renegotiate the deal with Boston. The Red Sox were not willing to accept the medical records of Brusdar Graterol, pitcher from Minnesota, in the initial three-team trade. So the Dodgers took the pitching prospect from the Twins and also gave up three Dodgers in a separate deal.

Mookie Betts is considered the second-best player in the MLB behind Mike Trout of the Los Angeles Angels. Betts won the MVP award for the 2018 championship season with a .346 batting average; he had a .295 avg for a mediocre 2019 season, but led the league in runs scored.

Betts is in his final year of his current $27 million contract and is expected to be offered upwards of $300-$400 million on the next contract at the end of this year. The Dodgers are hoping that Betts will succeed in Los Angeles and will want to sign a new long-term contract following the season.

The Dodgers are fortunate that the Red Sox leadership wanted to stay under the salary cap this year and agreed to trade two of their top players. Boston likely also worried they wouldn’t receive anything in return after his contract expired at the end of the season.

Boston had offered Betts $300 million at the beginning of last season, but it was turned down as Betts planned to seek a contract similar to Angel’s Mike Trout in the $400 million range.

Additionally, the Dodgers benefit with the Red Sox swallowing half of the David Price’s $96 million remaining contract. Furthermore, the Red Sox’s manager, Alex Cora, was fired due to recent cheating scandals with the Red Sox and Astros, who ironically won their 2018 and 2017 World Series’ over the Dodgers. With this trade, Boston hope to stay competitive this year.

The Dodgers had made offers on other big potential trades so far this winter for Stephen Strasburg, Anthony Rendon, and Gerrit Cole, but were outbid by other clubs. This ideal trade will allow for the Dodgers to keep their top young players and prospects.

This trade also makes the Dodgers the heavy favorite to win another NL West crown, on top of winning the last seven years. However, they have still lost to the eventual World Series winners in the last three seasons.