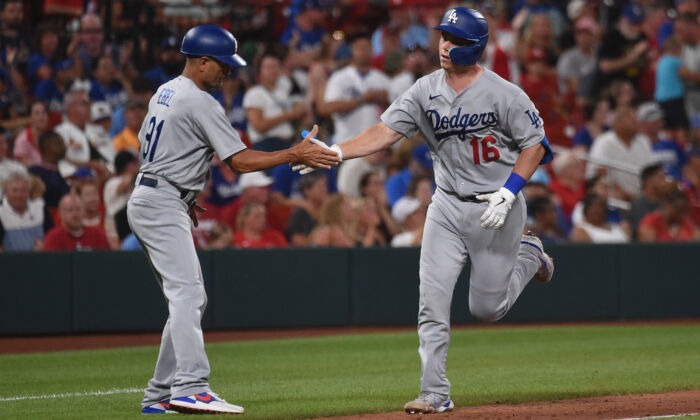 Will Smith #16 of the Los Angeles Dodgers celebrates his two-run home run with third base coach Dino Ebel #91 against the St. Louis Cardinals in the seventh inning at Busch Stadium, in St Louis, on July 13, 2022. (Joe Puetz/Getty Images)
Baseball

Dodgers Beat St. Louis 7–6 in Biggest Comeback of the Year

The Los Angeles Dodgers earned their eighth win in nine games on Wednesday night, with a late rally from six runs down to finally take the lead in the ninth, winning 7–6 against the St. Louis Cardinals.

The Dodgers are 12–2 in their last 14 games, maintaining the National League best record of 57–30 and leading their NL West rival San Diego by 8.5 games.

“I kind of sound redundant when I say it’s the biggest win of the year,” said Dodgers manager Dave Roberts of their largest comeback victory. “But it was a big one.”

The comeback victory allowed Dodgers All-Star Tony Gonsolin (11–0, 2.02 ERA) starting pitcher to keep an unbeaten record after falling behind 6–0 in six innings; he had previously not given up more than two runs all season.

“I thought my slider was really bad,” Gonsolin said. “I didn’t do a good job executing pitches with two strikes. They jumped on some mistakes early.”

Max Muncy forced four walks and a sacrifice fly in the ninth inning, scoring Austin Barnes to tie the game at six runs. He ignited the comeback by taking one of four walks, forcing Cardinals starter Adam Wainwright to be relieved early in the sixth.

“We don’t feel like we’re ever out of it, doesn’t matter what the score is,” Muncy said. “We know who we are. We know what we’ve been doing. You’ve just got to find a way to stay in the game even when it seems like it’s really bad. We’re really good at doing that.”

Will Smith began the rally with a two-run 422 feet shot scoring Freddie Freeman in the seventh. Freeman raised his batting average to .317 going 3-for-3 on the night.

The Dodgers added three runs in the eighth inning after Cody Bellinger’s single, a walk by Muncy, followed by Mookie Betts’s double to score Bellinger. Trea Turner would then hit a two-run RBI single, scoring Muncy and Betts, to get within one, with the score 5–6.

Bellinger celebrated his 27th birthday with two runs and two hits, stating that the Dodgers got momentum in the comeback with Smith’s homer and Betts’s double.

“Doesn’t matter how it looks, we just keep on going,” Turner said. “The way you win is always fun, too. [It] was a little bit more enjoyable in the clubhouse. I just feel like the vibes are up.”

Justin Turner doubled to deep right-center leading off the ninth and was substituted by Austin Barnes to run. Bellinger got his second hit with a single to right-center, followed by Muncy’s sacrifice fly to score Barnes.

Hanser Alberto singled off reliever Giovanny Gallegos (2–4) to left with two outs, scoring Bellinger, to give the Dodgers the eventual winning run at 7–6.

Craig Kimbrel (3–4, 4.5 ERA) would get credit for the win coming in relief in the bottom of the eighth inning. Alex Vesia and Caleb Ferguson also came in for relief in the sixth and seventh innings, while Evan Phillips (3–3, 1.54 ERA) got his first save closing out the ninth.

Having split the first two games of the three-game series, the two teams meet Thursday for the finale as the Dodgers start LHP Tyler Anderson (9–1, 3.15 ERA) against Cardinals RHP Dakota Hudson (6–5, 4.00 ERA). Anderson has a career high nine wins and is 0–2 against St. Louis with a 7.90 ERA, while Hudson pitched six scoreless innings in a 1–0 loss against Philadelphia on Saturday.