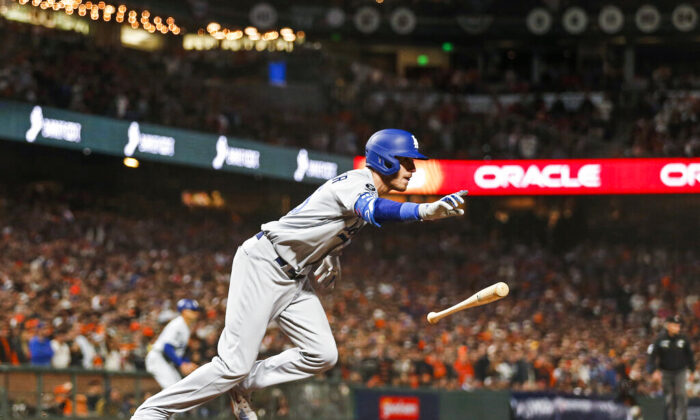 Los Angeles Dodgers' Cody Bellinger runs to first base after hitting an RBI-single against the San Francisco Giants during the ninth inning of Game 5 of a baseball National League Division Series Thursday, Oct. 14, 2021, in San Francisco. (AP Photo/Jed Jacobsohn)
Baseball

Dodgers Advance Over the Giants in Ninth Inning Dramatics

SAN FRANCISCO—The rivalry between the Los Angeles Dodgers and the San Francisco Giants began over 130 years ago. Hall of Fame Dodgers announcer Vin Scully tweeted that Thursday night’s Game 5 “is the most important game in the history of their rivalry.” It’s their first-ever post-season series meeting for the NLDS title. The Dodgers pulled through to win with a final score of 2–1. The game was filled with high drama, but ended in controversy.

As expected, it was a defensive pitchers’ duel between Giants young ace Logan Webb, and eventually, Dodgers Julio Urias. Webb had shut out the Dodgers in Game 1. In this game, he gave up four hits total, and one run in the sixth, before being relieved after seven complete innings.

The Dodgers planned to start Urias. However, manager Dave Roberts used an unconventional tactic of starting relievers, Corey Knebel and Brusdar Graterol, to pitch the first two innings. Urias came in the third inning and allowed just three hits through four innings of work. One of those was a solo home run that tied the game in the bottom of the sixth inning. His record remains a remarkable 20–3 for the season.

The Dodgers had several opportunities to score, as Mookie Betts led the team with a perfect four hits in four attempts. He broke the game open in the top of the sixth inning hitting a single. After stealing second base, he scored from Corey Seager’s clutch double. Giants Darin Ruf tied the game with a home run in the bottom of the inning.

In the ninth inning, Dodgers Justin Turner got on base after being hit by Giants reliever Camilo Doval. Gavin Lux was then able to single to right field, advancing Turner to second. Cody Bellinger was then clutch with the most important hit of the game: a single to right-center field that scored J Turner from second. Bellinger had struggled from a back injury since last year, and also broke a leg this year. His hitting average this year was a meager .165 at one point, and only .080 against the Giants. However, he was able to persevere through the injuries and was successful in the biggest moment.

The Giants had the bottom of the ninth inning to tie or win the game.  The Dodgers countered with pitching their veteran starting ace, Max Scherzer, who had just two days to rest. The 37-year-old was acquired in late July through a trade with the Washington Nationals, and recently had his first loss as a Dodger, giving up a home run in Game 3, losing 1–0. Now was his first opportunity to record a save as a reliever.

Scherzer struck out two batters. But between the strikeouts, J Turner made a rare error dropping a ground ball out his glove. The final out was called when the home plate umpire referred to the first base umpire for clarity on a possible strike-swing on Giants Wilmer Flores. The replay looked like Flores made a check-swing and the call should have been a ball. Indeed, an anti-climatic strike-out ending to a most competitive series.

“That was crazy. That’s nuts,” Scherzer said. “So to be in that moment, with everything on the line, with the way we’ve been playing this whole series, to get the ball in that situation, man, that was a rush.”

The Dodgers had won the World Series last year. Among their veterans is Betts, who has been consistent throughout the series and carried the team offensively.  He had half of the team’s hits in the game and was successful in all four batting attempts. Betts is only the third player in Major League history to hit four for four in a winner-take-all postseason game. Betts is batting over .500, 13 of 24, in six elimination games since joining the Dodgers.

Betts was rather humble when asked by ESPN about his mindset coming into the game: “Just be ready to play. Know I have to do something to help the team win. I have to do whatever it takes. My four hits were good; but I think, was better was Belli[ginger] and Lux and bottom of the line-up, turning it over, pushing across a run there. And Julio and the bullpen did an amazing job, just keeping them off the board. And so it makes it a lot easier when the pitchers can do that for us.”

When asked why he wasn’t celebrating yet, Bett’s said, “I’m sure they’re in there. Yeah, they’re in there drinking beer and celebrating. But I have to turn the page and get ready. I have to get ready for this next series, and I can’t really celebrate until I hold up the World Series trophy,” as stated by ESPN.

Following the game, Dodgers manager Roberts said to ESPN, “I think what great ball clubs have the ability to do is understand the gravity of a moment, a series in this case, give everything they have to that moment or series,” adding, “But also understand that our job’s not done. So, we poured everything we could into this series and it took everything we had to beat these guys, but we have a day reset. And now our focus turns to the Braves.”

The Dodgers and the Atlanta Braves shall meet for Game 1 of the National League Championship Series this Saturday at 2:07 ET.