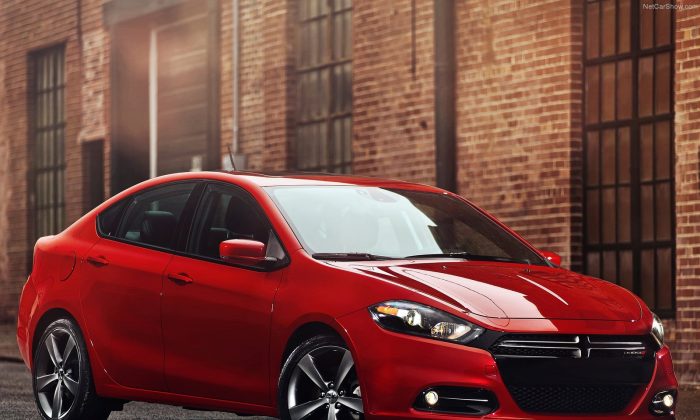 Dodge Dart Has a Lot of Compact Sedan Pluses

There are plenty of things I like about the Dodge Dart. My sinister-looking $23,620 2015 Dart SXT Rallye painted in Granite Crystal Metallic with its 17-inch aluminum wheels in the same color, make for a serious head-turner. Its exterior lines only add to the curb appeal. Likewise, the roomy interior is neatly arranged, well-constructed and comfortable. Plus, plus, plus so far.

Moving along the checklist, steering response and feel are pretty-darn good too. It corners with authority; assured and well for a front-wheel-drive sedan. Ride comfort won’t disappoint most families either. How’re we doing to this point? Not bad.

My SXT-grade test Dart came standard with the 184 hp 2.4 L 4-cylinder engine. It had more than enough get-up-and-go to pull the Dart’s 3,200 or so pounds off the mark when the light turned green, as well as overtake slower traffic on I-85 when rolling along at 65 or 70 miles per hour. Right out of the box, the 2.4 L is married to a 5-speed manual transmission. I’m of the opinion compact cars ought to provide the opportunity to stir your own gears; so, this is another check in the plus column as far as I’m concerned. My test Dart came with the $1,250 6-speed, driver-shiftable automatic tranny.

I typically don’t flip driver-shiftable transmissions into manual mode, but I know lots of people who do. I am surprised steering wheel-mounted shift paddles aren’t available even in the sportier GT trim or the SXT’s Rallye package. Other than this oversight, though, the Dart’s automatic does a decent job of efficiently delivering engine output to the front rubber.

Two other engines are available within the Dart family. For drivers simply interested in covering the distance between one point and another, the $16,495 base SE grade derives its thrust from a 160 hp 2 L 4-cylinder engine. Even when bolted to the standard 5-speed manual, this engine isn’t going to manufacture much in the way of grins. You can opt for the automatic transmission, but the result certainly isn’t an increase in the fun-to-drive quotient. Then there is Dart’s Aero trim that turns its low-resistance tires with a 160 hp 1.4 L turbocharged 4-cylinder via either the manual or automatic tranny. Aero is strictly an exercise to effect a Dart with somewhat higher fuel economy, which it does.

Dart sort of straddles the line between compact and midsize sedans. The government treats it as a mid-size, but it is measurably smaller—particularly in length—than some other midsize cars like Ford Fusion and Nissan Altima. Generally its fuel numbers aren’t as good as many compacts, but are as good as or better than midsize sedans. With three engines and two transmissions, there are several sets of government-estimated fuel numbers. The combined city/highway numbers for the base 2 L are 29 mpg with the manual and 27 mpg with the automatic. The Aero’s 1.4 L turbo posts combined numbers of 32 mpg regardless of the tranny. And finally, the 2.4 L delivers a combined 27 mpg, also with either transmission.

The Dart SE is about as bare bones as they come in today’s market. Power windows and a four-speaker audio system with auxiliary audio jack are the highlights. Ponying up that extra $2,505 to step up a grade to the SXT is money well spent. Added to the SE’s puny array of standard equipment are power door locks/outboard mirrors, remote keyless entry, air conditioning, automatic-on headlights, Bluetooth connectivity, cruise control, and a six-speaker audio system with iPod connectivity.

In addition to the $595 Rallye package with its beefed up suspension and automatic-transmission, options on my test SXT included a $595 package with the 8.4-inch touchscreen Uconnect system with iPod interface and rearview camera, and $595 upgraded audio system with satellite radio capability and navigation system.

Although Dart doesn’t set the bar in its segment, it does offer much of what people want when buying a compact sedan. If you want a little more, Dodge is giving Dart a major refreshening for 2016.