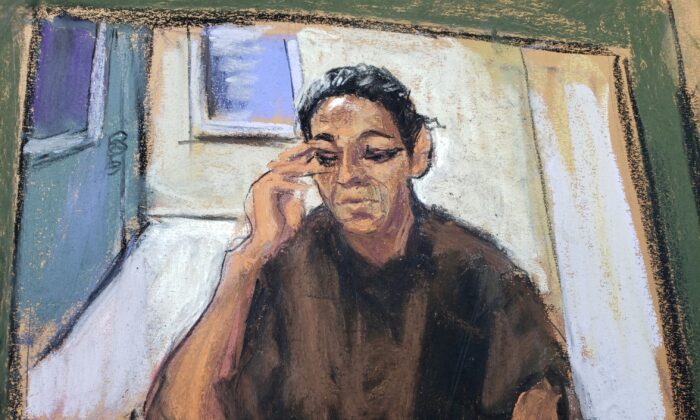 Ghislaine Maxwell appears via video link during her arraignment hearing where she was denied bail for her role aiding Jeffrey Epstein to recruit and eventually abuse of minor girls, in Manhattan Federal Court, in the Manhattan borough of New York City, New York, U.S. on July 14, 2020. (Jane Rosenberg/File Photo/Reuters)
US News

Documents in Ghislaine Maxwell Criminal Case Expected to Be Released by Oct. 22

NEW YORK—A U.S. judge on Tuesday ordered the release of a deposition that British socialite Ghislaine Maxwell gave in 2016 related to her dealings with the late financier Jeffrey Epstein, and which she had fought to keep under wraps.

U.S. District Judge Loretta Preska in Manhattan directed that a transcript of Maxwell’s testimony and other documents be released by 9 a.m. EDT (1300 GMT) on Thursday.

The documents came from a now-settled civil defamation lawsuit against Maxwell by Virginia Giuffre, who accused Maxwell of aiding Epstein in grooming and trafficking her for sex with him and other wealthy, powerful men.

Preska had earlier on Tuesday ordered an immediate unsealing of the April 2016 deposition, but pushed back the timetable after Maxwell’s lawyers objected. The judge said lawyers for Maxwell and Giuffre should in the meantime work out any disputes.

On Monday, the 2nd U.S. Circuit Court of Appeals rejected what it called Maxwell’s “meritless” arguments that her interests outweighed the presumption that the public had a right to see her deposition.

Lawyers for Maxwell had argued that the deposition contained intimate and sensitive information, and that releasing it would violate her right against self-incrimination and could generate negative publicity imperiling her ability to get a fair trial.

Maxwell, 58, has pleaded not guilty to helping Epstein recruit and groom underage girls for sex in the mid-1990s, and not guilty to perjury for denying her involvement under oath.

She is being held in a Brooklyn jail, and if convicted could face 35 years in prison. Her trial is scheduled for next July.Epstein killed himself in August 2019 at a Manhattan jail while awaiting trial on federal sex trafficking charges.