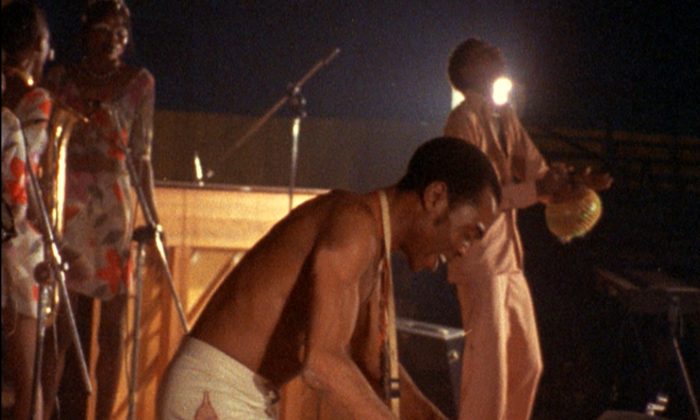 He was a mother’s boy married to 27 wives simultaneously. In many ways, Fela Anikulapo Kuti is a maddeningly difficult figure to fully take stock of, but he sure could play. Wisely, Alex Gibney focuses more on Kuti’s music than his politics in the infectiously funky documentary “Finding Fela.”

Kuti was the leading innovator of Afrobeat, the blistering rhythmic fusion of highlife, jazz, and funk music—and he remains far and away the most influential exemplar of the style. In his day, Kuti was probably the only musician more esteemed than James Brown across the African Diaspora.

Decades later, his music remained popular enough to spawn a Tony Award-winning Broadway show. That is where Gibney came in. On hand to document the show’s creative development, Gibney also incorporates a treasure trove of Kuti performance footage to tell the multi-instrumentalist’s story.

Musically, “Finding Fela” is a rich feast, with members of the real-deal Afrobeat band Antibalas performing the music for the Broadway show and living up to the example laid down by their inspiration quite nicely. However, Gibney the documentarian is reasonably forthright in addressing some of the darker aspects of Kuti the historical figure.

While his musical criticism of Nigeria’s military regime is celebrated at length, Kuti’s less-than-progressive attitudes toward women and sex are also acknowledged.

To his credit, Gibney also addresses the AIDS issue head-on. Tragically, the voracious Kuti denied the existence of the disease and refused to practice safe sex, even when he began to exhibit obvious symptoms. Admirably, the Kuti family was also rather courageously forthcoming after their patriarch’s death. In contrast, Bill T. Jones, the co-creator and choreographer of the Broadway show, admits they basically punted on those problematic final days.

Gibney is a wildly inconsistent filmmaker, who can spin out unsubstantiated conspiracy theories in a film like “Client 9” but then craft an insightful sports documentary like “Catching Hell.” In “Finding Fela,” Gibney obviously decided to, when in doubt, cut to some music, which is a winning strategy.

Whether they are recorded in Kuti’s storied club, the Shrine, or in a Broadway theater, the collected performances are enormously entertaining.

“Finding Fela” is the rare sort of documentary that will have viewers nodding their heads and getting down. Editorially, it also happens to be reasonably balanced and comprehensive. There is really nothing on the negative side of the ledger for it—it is all positive.