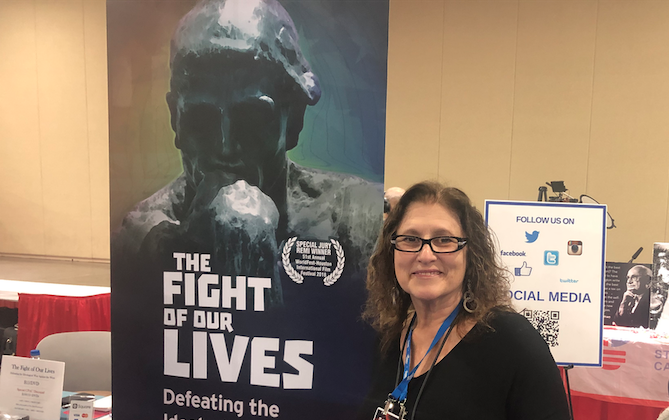 Documentary Explores the Ideological War Against the West

With the 2020 elections coming up and campaigns underway, the idea of democratic socialists and socialism has become a major topic of conversation.

The Hill states, “A majority of Americans say socialism is incompatible with American values, and only 10 percent of voters in a new poll have a positive view of socialism.”

Nonetheless, ideologies with their roots in socialism have increasingly spread in the United States over the years, which brings up the question of how this has happened and what kinds of ideologies these are.

Gloria Greenfield, a documentary producer, director, and writer, produced the recent documentary film titled “The Fight of Our Lives: Defeating the Ideological War Against the West.” The film explores “anti-Western ideas, ideologies and movements, along with their subsequent penetration into Western academia, politics, and society,” according to the film website.

Looks interesting! “We need to maintain moral confidence.”
The Fight of Our Lives – Defeating the Ideological War Against the West, is a hard-hitting new documentary film by… https://t.co/QGgdeusnhy

The film warns about the high risk of collapse of any great empire or civilization, and how the rise of critical theory studies, political correctness, attacks against free speech, and other ideologies threaten the value systems of western civilization.

Greenfield told The Epoch Times that she first developed the inspiration to create this documentary when she was working on an earlier documentary that explored hatred against Jewish people.

Through creating that piece, Greenfield realized that “to understand contemporary Jew hatred, one really had to understand the broader context,” she said.

This inspired her to create a documentary that explores the ideologies that have been changing and shaping our society over many decades.

When asked how she found and gathered all the commentators for the documentary, Greenfield said she conducted extensive research on the topic and sought out scholars and experts for interviews.

Looking forward to New York premiere on May 1 of Gloria Greenfield’s important new film The Fight of Our Lives: Defeating the Ideological War against the West. Features Niall Ferguson, Bruce Thornton, Allen West and others. Post-screening remarks by me and Emanuele Ottolenghi. pic.twitter.com/m2pqFLn4hp

Another scholar who contributed to the film commentary was Bruce Thornton, an American classicist at California State University Fresno and research fellow at Stanford University’s Hoover Institution.

“[Thornton’s] understanding of what he refers to in the film as the ‘therapeutic age,’ where feelings are the most important and there’s been a rejection … of taking any responsibility for their actions—I thought that was a very important notion that needed to be addressed in the film,” said Greenfield.

The movie has garnered a variety of reviews and has been generally well received and enjoyed by viewers.

“Soon after the film came out, I received an email from a professor in Paris, who was so grateful for the film and told me that he was using it in his classrooms,” said Greenfield.

The film is also being shown in various film festivals around the world.