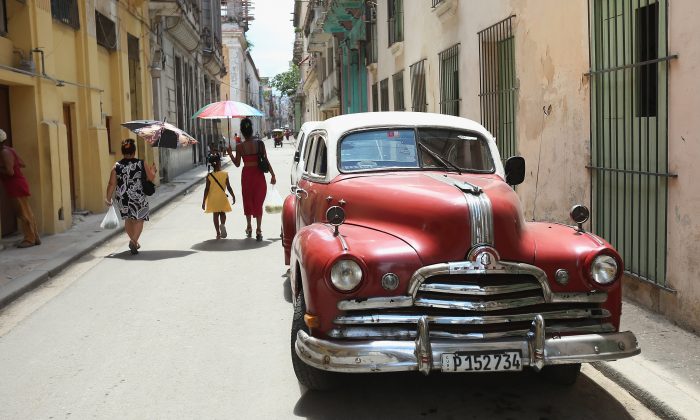 An antique American-made automobile is parked in the old part of Havana, Cuba, on Aug. 14, 2015. (Chip Somodevilla/Getty Images)
Viewpoints

Do Not Forget Cuba

Despite the propaganda, it's still a socialist hell

It’s easy to forget about Cuba. It’s there. It doesn’t bother anyone. However, it still serves as the best example of why communism doesn’t work and will never work.

An international consortium recently had to bail out Cuba with a credit line of $9.6 billion and by forgiving some of its debts. The cancellation of the regime’s debt by some countries, unfortunately, has not helped to promote freedom and democracy, but instead has perpetuated the dictatorship.

The great lie of the communist regime and its supporters, used to justify the misery into which they have plunged the country in the last five decades, is the nonexistent trade embargo. There is none. An embargo is not a blockade.

Embargo? Cuba has more than 27 bilateral treaties with 90 countries. Embargo? Exports to Cuba, according to the World Bank, reached 17.15 percent of GDP in 2015.

However, the fallacy of this supposed blockade is constantly used to whitewash and justify the misery and repression of the dictatorship. In reality, the Castro regime—like any socialist government—is a machine of squandering subsidies.

The Castro regime dilapidated subsidies from the Soviet Union between 1960 and 1990 equivalent to five Marshall plans, and yet it failed to improve its economic growth or take advantage of these huge transfers to improve productivity. Between 1960 and 1990, Cuba received more than $65 billion from the Soviet Union, not to mention the money it received from other socialist countries.

Cuba even benefited from a subsidy from the Venezuelan regime—which itself receives billions from China—that covered 70 percent of the country’s consumption. It also receives hundreds of millions from international organizations.

The shortage in basic products affects 70 percent of the population, according to El Diario de Cuba and Infobae. These numbers invalidate the infamous propaganda that claims there is “no malnutrition” in Cuba; in fact, almost all Cubans suffer from economic scarcity of one sort or another.

Anyone who travels to Cuba can see that the constantly repeated “nonexistence of child malnutrition” is false and only tries to defend a regime that still uses ration cards and propagates misery.

UNICEF notes that the number of underweight children has been reduced to just 4 percent, a large number compared to other developing countries.

In addition, Cuba suffers from the “most expensive free health care in the world,” as I was told in Havana. The myth of the quality and universality of health care has been dismantled on several occasions. María Werlau, from the NGO Cuba Archive, explained: “Health care in Cuba is extremely bad for the ordinary citizen. There is an apartheid that favors the ruling elite and foreigners who pay in dollars.”

The only way Cuba can catch up to other developing countries is by getting rid of communism.