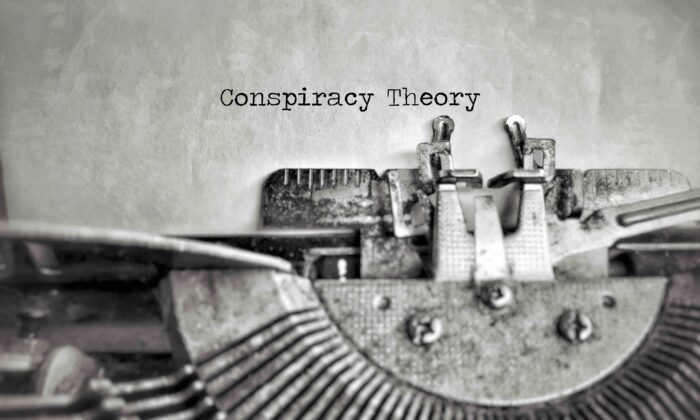 It is also important for the State to inculcate in its subjects an aversion to any “conspiracy theory of history;” for a search for “conspiracies” means a search for motives and an attribution of responsibility for historical misdeeds. If, however, any tyranny imposed by the State, or venality, or aggressive war, was caused not by the State rulers but by mysterious and arcane “social forces,” or by the imperfect state of the world or, if in some way, everyone was responsible (“We Are All Murderers,” proclaims one slogan), then there is no point to the people becoming indignant or rising up against such misdeeds. Furthermore, an attack   on “conspiracy theories” means that the subjects will become more gullible in believing the “general welfare” reasons that are always put forth by the State for engaging in any of its despotic actions. A “conspiracy theory” can unsettle the system by causing the public to doubt the State’s ideological propaganda. — Murray N. Rothbard, “Anatomy of the State”

This essay represents a “conspiracy theory” (or better, a conspiracy hypothesis) about the uses of the term “conspiracy theory” itself. I acknowledge that the term is one of the most potent epithets that can be hurled at a writer or speaker, that it is mostly used to delegitimize and dismiss its target, and that it serves not only to discredit the claim that a writer or speaker makes but also the very investigation into purported conspiracies. The phrase represents a condensed, shorthand means of labeling a claim negatively and humiliating the claimant, disqualifying the claimant and the claim a priori. Likewise, in writing of the “conspiracy” behind the use of the phrase, I am hereby opening myself up to the charge of “conspiracy theory.” I submit that the terms “conspiracy theory” and “conspiracy theorist” are used most frequently by those on the left, who usually associate the phrases with “right-wing” arguments and interlocutors. Therefore, in writing this essay, I am openly inviting the condemnation of leftists. But this is intentional.

In the United States, the term “conspiracy theory” is often credited to a disinformation or deflection campaign of the CIA in connection with the assassination of U.S. president John F. Kennedy—to discredit all but the official narrative concerning that event. But the Oxford English Dictionary finds the first usage in a 1908 article in the American Historical Review and defines the compound noun as “the theory that an event or phenomenon occurs as a result of a conspiracy between interested parties; specifically, a belief that some covert but influential agency (typically political in motivation and oppressive in intent) is responsible for an unexplained event.”

It is the view that an explanation of a social phenomenon consists in the discovery of the men or groups who are interested in the occurrence of this phenomenon (sometimes it is a hidden interest which has first to be revealed), and who have planned and conspired to bring it about.

Popper called the conspiracy theory of society “a typical result of the secularization of a religious superstition,” an explanation of historical causality that replaces the causal agency of the gods or God with that of “sinister pressure groups whose wickedness is responsible for all the evils we suffer from—such as the Learned Elders of Zion, or the monopolists, or the capitalists, or the imperialists.”

Why is this so? Why do achievements differ so widely from aspirations? Because this is usually the case in social life, conspiracy or no conspiracy. Social life is not only a trial of strength between opposing groups: it is action within a resilient or brittle framework of institutions and traditions, and it creates—apart from any conscious counter-action—many unforeseen reactions in this framework, some of them perhaps even unforeseeable. (307)

Actions, Popper noted, have unintended as well as intended consequences. This is because they take place in a social context that cannot be fully understood by social actors. The conspiracy theory of society is wrong because it claims that the results of actions are necessarily those intended by those interested in such results.

A partial answer involves Marx’s idea of “class consciousness”—the notion that all members of an economic class share the same mentality, worldview, and intentionality—and particularly his claim that all members of the capitalist class entertain and act upon the same idea—namely, a secret, hidden intention to extract value from workers at the point of production, value which Marx measured (mistakenly) in terms of the socially necessary labor time embedded in a commodity. As Marx wrote in “Capital,” volume 1, chapter 7, section 2:

The fact that half a day’s labour is necessary to keep the labourer alive during 24 hours, does not in any way prevent him from working a whole day. Therefore, the value of labour-power [what the capitalist pays the laborer to sustain his life], and the value which that labour-power creates in the labour-process [the value of the commodities he produces], are two entirely different magnitudes; and this difference of the two values was what the capitalist had in view, when he was purchasing the labour-power. (emphasis mine)

In other words, all capitalists cheat all members of the working class of approximately half a day’s pay every single day. Marx called this methodical, routine theft “the production of surplus value,” which the capitalist extracts at the point of production and which is the sole source of the capitalist’s profit. That all capitalists hold this hidden intention and separately act upon it—a fact that supposedly awaited Marx to “reveal” to the world—involves a conspiracy that is breathtaking in its scope and effect, but no more breathtaking than Marx’s accusation that such massive, ongoing, intentional fraud is the basis of capitalism.

The very idea of an economic class acting in concert to “exploit” workers is no less a conspiracy theory than the belief that a Jewish cabal runs the world. In fact, it is more suspect than the latter because it ascribes a collective, secret intention to the entire “capitalist class,” one that is not even voiced between the conspirators. This is simply something that every capitalist knows to do and does, regardless of any communication with other capitalists. It discounts the fact that capitalists do not, in fact, act collectively but rather in competition with each other, and that part of this competition is the competition for the resource of labor. This latter competition drives up the price of labor when it is in shorter supply, rather than depressing it.

It cannot be overestimated how central this supposed phenomenon is to the Marxist project; “exploitation” is the basis of the Marxist requirement that the working class “unite,” rise up, and overthrow its capitalist overlords. It is the basis of the need for communist revolution. This need is based on a conspiracy theory (and the false labor theory of value).

Yet curiously, socialists are probably the group most apt to level the accusation of “conspiracy theory.” As a contemporary example, take this 2017 essay in CounterPunch, written by an avowed Marxist, entitled “A ‘New Dawn’ for Fascism: The Rise of the Anti-establishment Capitalists.” Here’s the first paragraph:

The world rests on a precipice. On the one hand is institutionalized exploitation and imperialist violence. The well-being of humanity continues to be severely hampered by the priorities of a small unstable capitalist class, who would prefer that the rest of us—those who must engage in a daily struggle to purchase the essentials for living (like food and a roof over our heads)—remain unorganized as a cohesive class. And on the other hand, there are those who believe that the fundamental class division between the rulers and the workers is both intolerable and unsustainable, and so seek to participate in and organize mass movements for social change that will bring an end to the domination of one class of people over another. (emphasis mine)

We see Marx’s claim of surplus value extraction embedded in the first sentence, followed by the belief that “a small unstable capitalist class” intentionally aims at keeping “the rest of us … unorganized as a cohesive class.” Likewise, the conspiracy of the capitalists is largely, contra Popper, successful. The article goes on to complain about “problematic and conspiratorial, but ostensibly anti-establishment, ideas [that] have been able to sometimes temporarily supplant class-based analyses about how and why social change happens.” In the rant, these are “right-wing” and “fascist” ideas that are characterized no less than thirty-six times as “conspiracy theories” and “conspiratorial” thinking engaged in by “conspiracy theorists.”

I return now to Popper’s discussion in “The Open Society and Its Enemies” by noting that in referring to the conspiracy theory of society, Popper meant a thoroughgoing theory meant to explain all outcomes:

The conspiracy theory of society cannot be true because it amounts to the assertion that all results, even those which at first sight do not seem to be intended by anybody, are the intended results of the actions of people who are interested in these results. (emphasis mine)