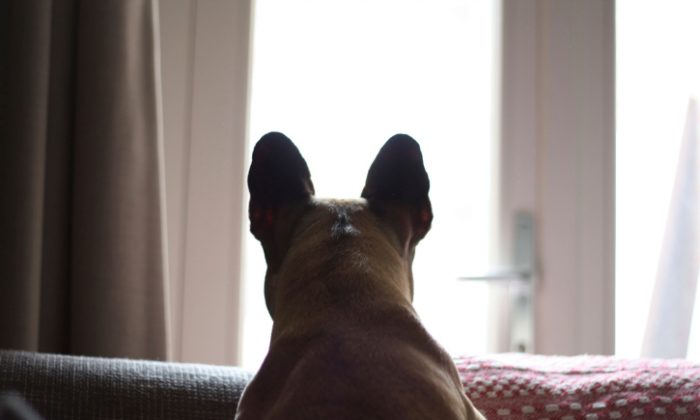 Veterinarian Dr. Michael Fox has encountered many stories of dogs seeming to sense from a distance that their masters are in trouble and other such experiences that seem to indicate animal clairvoyance.

Dr. Fox believes that animals can tap into what he calls the “empathosphere,” where thoughts and feelings physically exist. Animals seem able to detect events at a geographical distance or to find their way to useful places (such as the locations of their masters) even if they’ve never been to those locations before. This arises from their heightened empathy, according to Dr. Fox.

Animals’ abilities function “more cleanly than ours, which … [are] buried most of the time under the weight of consciousness,” wrote co-author of “The Spiritual Anatomy of Emotion” Michael Jawer in an email to Epoch Times, explaining Dr. Fox’s theory.

Here are a few surprising stories of animals seeming to sense things in a way we can’t yet explain.

1. Animals Travel Miles to Refuge They’ve Never Been to Before

A file photo of a water buffalo. (Thinkstock)

Dr. Fox gave an example on his website: “Two animals demonstrated the boundless nature of the empathosphere at India Project for Animals and Natures (IPAN) Animal Refuge in the Nilgiris, South India,” he wrote. “Somehow they knew that the Refuge was a place of security and relief from suffering. How else to explain these two animals coming several miles to where they had never been before? One was a dog who dragged himself after being hit by a vehicle for over a mile to the Refuge with a broken back and with his testicles hanging out. Another was a water buffalo whom staff found one morning waiting at the Refuge gate. Her condition was quickly recognized and treated- an infected vagina seething with flesh-eating maggots.”

In a 2012 radio interview with Animal Wise Radio, Dr. Fox gave what he called a typical example: an old man in the hospital is dying and his dog at home starts howling at 10 a.m. The phone rings at 11 a.m. with the announcement that the man died. The dog seemed to sense its master’s death.

“When you have enough anecdotes, you have a statistic, and the statistic that I was showing was that a lot of dogs especially have this empathosphere connection,” Dr. Fox said.

Image of elephants in Africa via Shutterstock

Mike Fry, one of the radio hosts, recounted another story told in multiple media reports at the time. Lawerence Anthony had set up a private reserve for elephants in Africa. Two days after he died at the age of 61, multiple wild herds of elephants arrived at his home, having walked more than 12 miles to get there. The elephants had not been to his house for well over a year. They stayed for two nights.

“They were mourning,” Fry said. “They knew that he died.” Anthony’s widow was touched by what she saw as a tribute to her late husband by the animals he had helped.

4. A Strange Occurrence After the Death of a Beloved Pet

Image of a door via Shutterstock

In “The Spiritual Anatomy of Emotion,”Jawer told a story about his recently deceased cat, a story he relates to the idea of the empathosphere.

Dalton the Great White Cat, as Jawer liked to call him, had died 10 days before. Dalton was hit by a car and the person who found him had trouble notifying Jawer and his family right away, since the cat had slipped his collar off before he was hit.

A couple days after Jawer had learned the fate of his cat, he was faced by the dreaded question from his 2-year-old daughter, Gabrielle: “Where’s Dalton?”

As he began explaining, he felt a lump in his throat; he and his wife, Bonnie, were both sad about the loss of Dalton and having to explain it to their little girl revived and added to the pain.

Just then, a series of knocks rang out from the front door, just a few feet away. “Oddly, the knocks seemed to me to be coming from a position lower down on the door than the average person (even someone small) would knock,” Jawer wrote. “In any event, scant seconds later my wife had opened the door—and no one was there. Not a child, not an adult, not a mischievous teenager, not an animal.

“We thought fleetingly that it might have been a bird, but dismissed that possibility as the knocking was distinctly different than a mere pecking. And anyway, no bird had ever pecked at our door. Nor had anything remotely similar ever happened to Bonnie or me.”

Paul the Octopus opens a box with decorated with a Spanish flag on July 9, 2010. (Patrik Stollarz/AFP/Getty Images)

Some animals have even been said to accurately predict the outcome of sporting events.

Paul the Octopus at the Oberhausen Sea Life Center in Germany earned fame in 2010 for “predicting” the winner in each game of the FIFA World Cup that year involving Germany, as well as the final game, which Spain won. Paul’s keepers would present him with two boxes of food, each decorated with the logo of a team. The box Paul ate from first would show his “prediction.”

Of course, the octopus only had to choose from two options and for eight games, not an outstanding number of options, noted a Wall Street Journal blog article. The predictions may still be surprising and amusing, but not as extremely improbable as they may seem at first.

Mani the Parakeet in Singapore also earned fame for his predictions during the 2010 FIFA World Cup. He accurately picked the correct winners for all quarter-final ties, but he failed to predict the winner of the final, choosing the Netherlands instead of Spain. It is common to use parakeets in some Asian fortune-telling practices.

Across the world, a variety of animals have been credited with similar abilities, from Leon the Porcupine to Jimmy the Peruvian Guinea Pig to Harry the Australian Croc.