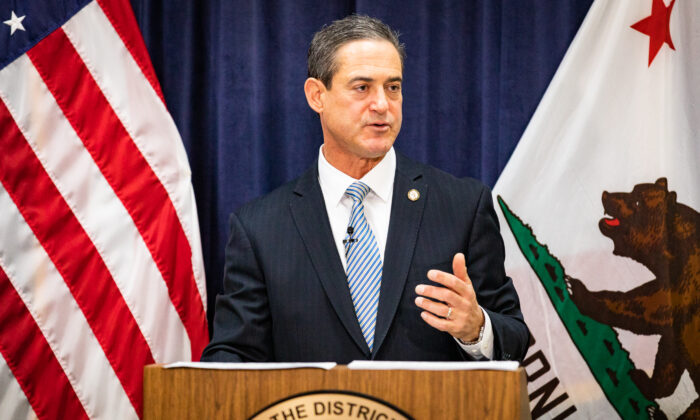 The suspect in the killings was identified as Reuben J. Smith, who was 39 when he took his own life with a gun in Las Vegas in 1999, according to Garden Grove police Lt. Mario Martinez.

The most prominent case involving similar use of new DNA testing and genetic genealogy to solve crimes was in the conviction of the Golden State Killer, Joseph James DeAngelo, who pleaded guilty in 2020 to 13 murders.

Orange County sheriff’s investigator Robert Taft said advances in technology even since DeAngelo’s arrest in 2018 helped make the case against Smith. Because the DNA investigators had collected genetic material from multiple sources at the crime scenes it wasn’t until more recent updates in the science that scientists could separate out the other sources to narrow it down to Smith, Taft said.

“It’s growing by leaps and bounds,” Taft said of the technology.

“We should never call these cold cases,” Spitzer said at a news conference. “That’s an inappropriate label today… because of the advances in science every case is solvable.”

Investigators were able to link Lloyd’s murder with the Cuevas killing in 2003. At that time investigators knew the same person killed the two women but could not work up a suspect.

Smith was identified as a potential suspect last year.

Smith was arrested in Las Vegas in July 1998 for sexually assaulting and attempting to kill a woman there, Martinez said. Smith’s DNA was collected when he was arrested in that case, but the technology at that time was in its infancy, Taft said.

“The evil in him. I know if I didn’t fight, I was going to die,” the woman in that attack said, according to Garden Grove police.

The victim managed to resist and escape, police said.

Lloyd’s brother, Tom, who couldn’t attend Monday’s news conference, said in prepared remarks that his sister was “tough. She wasn’t scared of much.”

Tom Lloyd added, “It’s hard for me to fathom how anyone can take another person’s life and just discard them.”

Smith lived in Orange County in the 1980s, and then later moved to Las Vegas in the 1990s, police said.

Cuevas’ cousin, Yolanda Lui, praised police for continuing to work the case and that knowing the name of the killer will bring some closure to the victim’s relatives.

“She is deeply loved and missed,” Lui said of her cousin.

Lui recalled her cousin’s dimples and the moment she shared with her that she had become a “born again Christian.”

Lee Neil, the sister of Janet Stallcup, whose 1976 murder was solved a year ago with the same investigative technique, also praised authorities.

“It’s finally over,” Neil said. “We know now the who, what, where, but we’ll never know the why.”

Spitzer said it is important to keep working the cases no matter how cold the trail goes.

“We never rest,” he said. “Whether the arrest is four minutes ago or four decades … we never give up, we do not give up.”

Spitzer said genetic genealogy has helped authorities solve four Orange County cold cases. Across the country about 200 cases have been closed because of the method, Spitzer said.