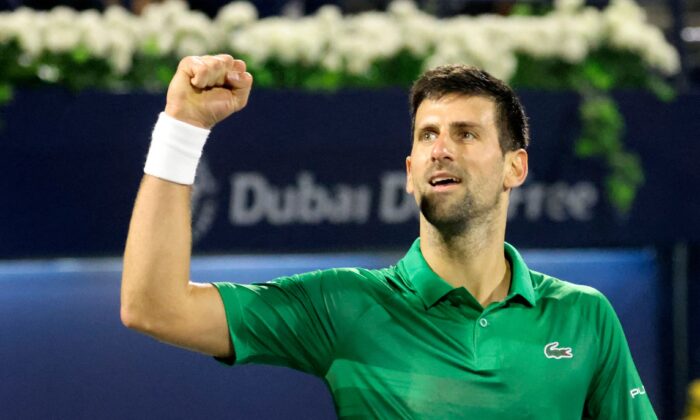 Novak Djokovic of Serbia celebrates after winning against Russian Karen Khachanov, during their ATP Dubai Duty Free Tennis match, in the Gulf emirate of Dubai, on Feb. 23, 2022. (Karim Sahib/AFP via Getty Images)
Tennis

Djokovic Vows to Use Tough Experiences to Fuel His Season

Novak Djokovic plans to use the challenging experiences he has endured this year due to being unvaccinated against COVID-19 as fuel for the rest of the season, the world number one said on Sunday ahead of his return to action in Monte Carlo.

The 20-times Grand Slam champion was unable to defend his Australian Open title in January after being deported from the country, having initially been admitted to the tournament despite not taking the vaccine.

“I try to be optimistic in life and consider myself a very optimistic, positive person,” Serbian Djokovic told reporters. “I take lessons available in every experience, particularly in something as large as what happened in January.

“Once I start playing matches … I will obviously have to deal with everything that probably has been dormant inside and is maybe waiting to come out.

“I don’t feel it has left huge scars that I’m unable to train or participate in tournaments or live my life … far from that.

“But it has been a challenging few months and something I never experienced before. So I will try to use that as a fuel for what’s coming up.”

Djokovic, who has only played three matches this year—all in Dubai—said he missed competing.

“The last four, five months have been really challenging for me mentally and emotionally, but here I am. I try to leave all of that behind and move on,” Djokovic said.

“My Roland Garros win last year is still fresh in my memory, so I try to use that as inspiration to kickstart the claycourt season in the best possible way.

“I intend to play the full claycourt season according to my schedule of the previous years. I understand I probably won’t be at my best particularly at the beginning of this week, so I’m testing my engine, so to say, and building my game.”

Djokovic will begin his claycourt campaign against Spaniard Alejandro Davidovich Fokina on Tuesday at the Monte Carlo Masters, which starts on Monday.