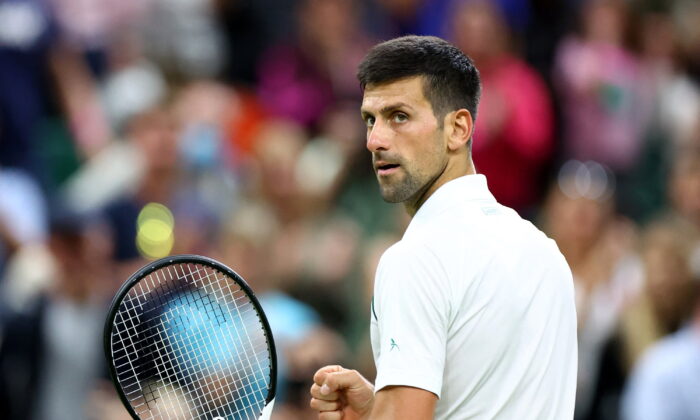 Djokovic Says, After Wimbledon Win, He Won’t Be Able to Attend US Open Unless Vaccine Mandate Lifts

Tennis ace Novak Djokovic will not be able to compete in the U.S. Open next month unless the COVID-19 vaccine mandate is lifted as he has no plans to get the shot, the Wimbledon champion said on Sunday in an interview shortly after his win.

The 35-year-old made the comment after beating Australia’s Nick Kyrgios, marking his seventh Wimbledon title and 21st Grand Slam title.

Djokovic explained that he is still not vaccinated and has no plans on getting the jab against COVID-19, which is necessary according to Biden administration policy to enter the United States and participate in the final Grand Slam of the season.

The Serbian native added that he believes it is unlikely he would be granted any exception to the vaccine mandate allowing him to compete in the U.S. Open, which begins on Aug, 29, as there is no such option available.

Non-U.S. citizens who are unvaccinated against COVID-19 are currently not permitted to enter the United States.

“I’m not vaccinated and I’m not planning to get vaccinated so the only good news I can have is them removing the mandated green vaccine card, or whatever you call it, to enter [the] United States or exemption,” Djokovic told reporters. “I don’t know. I don’t think [a] exemption is realistically possible. If that is [a] possibility, I don’t know what exemption would be about.”

John McEnroe, who was providing analysis of the Wimbledon final on ESPN, said Djokovic should be allowed to play at the U.S. Open.

“These politicians are getting in the way too much. They did it in Australia. Let’s let the guy come in and play in the U.S. I mean, come on, this is ridiculous,” McEnroe said. “But I don’t make those decisions. I hope someone makes the right one and allows him to play. That’s my personal opinion.”

He suggested possible work arounds. “You can agree to be tested. I don’t know. There’s gotta be a way around this, but we’ll wait and see. That’s not what it’s about right now.”

This is not the first time that Djokovic has been unable to play in an important competition due to his unvaccinated status. The tennis pro was deported from Australia last year before the first Grand Slam tournament of the year after having his visa canceled by Australian Immigration Minister Alex Hawke.

Djokovic and his lawyers had contended that he should have been allowed to stay in Australia and compete under a medical exemption from the vaccination because he had tested positive for the virus a month prior in December. He had also been told previously that the Australian government recognized natural immunity from prior infections, although this policy was subsequently changed.

Djokovic subsequently lost his court battle to have the cancellation of his visa overturned and was forced to leave.

Djokovic told reporters on Sunday that he doesn’t know what the future holds with regards to him competing in the U.S. open next month, adding that he hopes entry restrictions to the country will be eased.

“I don’t know. I don’t have much answers there,” Djokovic explained. “I think it’s just whether or not they remove this in time for me to get to USA. Whether or not I’m playing any tournament soon, I’ll definitely be resting for the next couple of weeks because it has been quite an exhausting and demanding period for me.

“Then, I’ll wait hopefully for some good news from USA because I would really love to go there.”

Djokovic previously told the BBC that he is not against vaccination but supports “the freedom to choose what you put in your body.”

He has received both support and criticism for his health decision not to get a COVID-19 vaccine.

Thank you for sharing your beliefs. I hope you don’t get judged for them. Or become a poster boy for hatred and bullying. You never know.

You are also influential figure, please don’t continuously disappoint. Unless that’s your role.

Despite Sunday’s win, Djokovic, who is currently ranked world No. 3, will drop to No. 7 in the rankings on Monday as Wimbledon won’t count towards any ranking points due to its decision to ban Russian and Belarusian players amid Russia’s invasion of Ukraine.