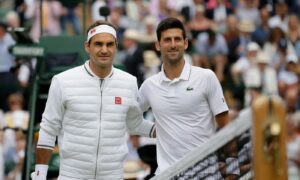 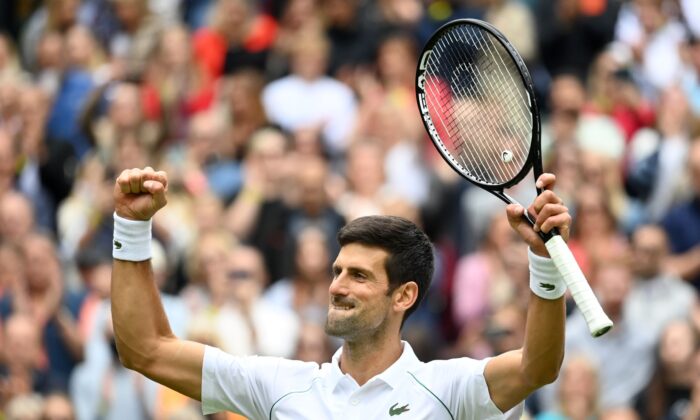 Djokovic on a Mission as He Glides Past Anderson

LONDON—Top seed Novak Djokovic has begun Wimbledon like a man on a mission, which considering the history the Serb is trying to create should come as no surprise.

The 34-year-old described his 6–3 6–3 6–3 second-round win over twice Grand Slam runner-up Kevin Anderson as “almost flawless” and no one on Centre Court would disagree.

His only slight issue was keeping his feet on the still-greasy turf, but his game was at its immaculate best as he appeared to be able to land each shot on a sixpence.

Djokovic made only five unforced errors in a masterful display against the South African he also beat in the 2018 final.

And while he did lose the first set of his opening round match against inspired British teenager Jack Draper, what has followed has been an ominous statement of intent.

Djokovic is not only chasing a sixth Wimbledon title and third in a row, he can also match Roger Federer and Rafa Nadal’s men’s record haul of 20 Grand Slam titles.

If that is not enough, he is also halfway to the calendar-year sweep of all four majors last achieved by Rod Laver in 1969 and could also be on for the Golden Slam if you add the Tokyo Olympics into the mix.

Quite simply, by the end of the year Djokovic could well have settled the GOAT (greatest of all-time) debate.

But we have been here before.

In 2016, Djokovic had also arrived at Wimbledon as a hot favourite having won the Australian and French Open titles that year to hold all four slams simultaneously.

Then, at Wimbledon, he was stunned by American Sam Querrey in the third round.

So Djokovic will certainly not be letting his guard slip when he plays American Denis Kudla on Friday.

Looking back to 2016, Djokovic said he had come in feeling a little deflated after the high of winning his first French Open.

“I’m going to try to learn from that experience that I had in 2016,” Djokovic, bidding to become the fifth man in history to win the first three Grand Slam tournaments of the season since Laver in 1969, told reporters.

“This time I’m probably, I would like to think, a bit wiser and a bit more experienced as a player and person. But it’s only two matches into the tournament, there’s still a long way to go.”

Anderson, on the comeback trail after knee injuries, played high-level tennis, but Djokovic broke serve with ease once in each set for a clean cut victory.

“I’ve done things on and off the court to make myself feel that I’m focused, yet at the same time calm and composed and clear with my game plan,” he said.

Only when he slipped over did he look at all ruffled, glaring angrily at the offending lawn, although he later refused to criticize the courts on which numerous players have fallen.

“Hopefully as the tournament progresses I’ll also fall less,” he said. “But I don’t mind falling more if the result is winning a match.”