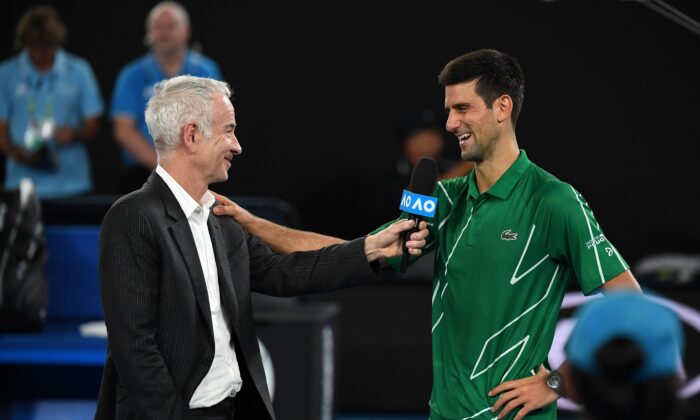 Djokovic Missing US Open Over COVID-19 Vaccine Status Would Be ‘A Joke’: McEnroe

Four-times U.S. Open winner John McEnroe said it would be “a joke” if Novak Djokovic is unable to compete at the U.S. tournament starting later this month due to his COVID-19 vaccination status.

Djokovic has not taken the vaccine and appears set to miss out on the year’s last Grand Slam due to current U.S. rules that require travelers to show proof of full vaccination to board flights to and enter the United States.

The Serbian previously said he was prepared to miss Grand Slam tournaments that require participating players to be vaccinated against COVID-19. Djokovic remains on the entry list for the Aug. 29–Sept. 11 tournament in New York.

“I would have had the vaccine and gone and played but he’s got very strong beliefs and you have to respect that.

“At this point, in the pandemic, we’re two-and-a-half years in, I think people in all parts of the world know more about it, and the idea that he can’t travel here to play, to me is a joke.”

Djokovic was unable to defend his Australian Open crown this year after being deported from the country over his vaccination status in January.

Rafa Nadal claimed victory in the tournament in Melbourne to move clear of Djokovic and Roger Federer with his 21st major trophy. Nadal then went on to add another Grand Slam title to his tally at the French Open, keeping him ahead of Djokovic, who won Wimbledon last month.

When asked if Djokovic’s chances of finishing above his rivals in terms of Grand Slam victories were being affected by his absences from major tournaments, McEnroe said, “that’s the question that we all want to know the answer to.”

“Obviously, Rafa Nadal has benefited from that. If a guy has won the Australian Open eight or nine times, you would think [Djokovic blew] a chance in a way.

“These three guys are already above everyone else. Rafa was able to pull off a miraculous win that not many people expected in Australia. Novak got there at Wimbledon and then Rafa got hurt.”