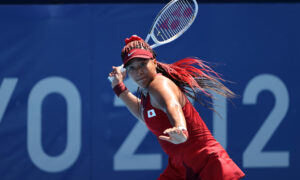 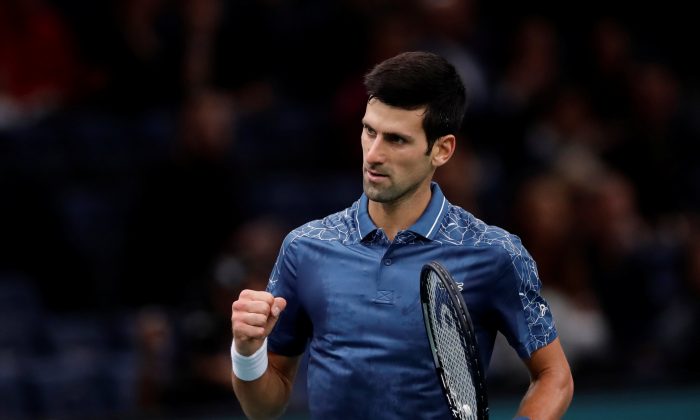 Serbia's Novak Djokovic celebrates winning his third round match after Bosnia and Herzegovina's Damir Dzumhur had to retire due to an injury at Tennis ATP 1000 Paris Masters in AccorHotels Arena, Paris, France, on Nov. 1, 2018. (Gonzalo Fuentes/Reuters)
Tennis

Djokovic Marks Return to World Number One With Paris Win

PARIS—Novak Djokovic celebrated his return to the summit of world tennis with a stroll into the quarter-finals at the Paris Masters as outclassed Damir Dzumhur had to retire with injury in the second set of their third round clash on Thursday.

The Serb, who learned on Nov. 1, that he would be back as world number one next week following Rafa Nadal’s withdrawal from the tournament through injury, was leading 6-1 2-1 when the Bosnian submitted to a back problem that had flared up in the first set.

Djokovic extended his winning streak to 20 straight matches and equaled a personal record of 29 consecutive completed sets won as he maintained the remarkable spell of form that has seen him rise from number 22 in June to the top of the game again.

Dzumhur, committed and courageous on the Bercy arena’s central court, suffered a tweak to his lower back when 4-1 down in the opening set.

Clearly in pain, he battled on in an 11-minute sixth game which eventually saw him broken for a second time and, though he continued after receiving physio treatment in a time-out and taking pain-killers, there was no way back.

Djokovic, looking in much sharper form than his opening match against Joao Sousa, took the set in 39 minutes and, once he had earned an inevitable break for 2-1, consoled the Bosnian, who told him at the net that he was in no shape to continue.

Seeking a record-equalling 33rd Masters and record-extending fifth Paris title, Djokovic will face a much more challenging test in the last eight against Marin Cilic, who had earlier looked in strikingly good form when beating Grigor Dimitrov 7-6(5) 6-4.

Cilic, who moved closer to securing one of the remaining places for the ATP finals in London, beat Djokovic here at the equivalent stage two years ago and also defeated him in the Queen’s tournament final before Wimbledon.

“I am very close to London, to securing my spot mathematically,” Cilic said. “Against Novak, it will be another big challenge. It’s great to play him again.”

John Isner’s hopes of also making the London finals received a blow when he was beaten 6-4 6-7(9) 7-6(8) in an absorbing, huge-serving battle by rising Russian Karen Khachanov.

The giant American saved four match points before the 22-year-old Khachanov, who had already staved off two himself, finally threaded a backhand winner past the net-rushing Isner to win after nearly two-and-a-half hours of massive hitting.

In the quarter-finals, Khachanov will meet Germany’s fourth seed Alexander Zverev, who took 80 minutes to overpower and finally subdue the scurrying defiance of Argentina’s Diego Schwartzman 6-4 6-2.