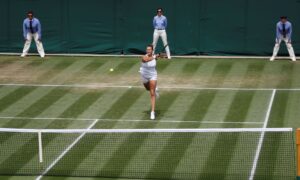 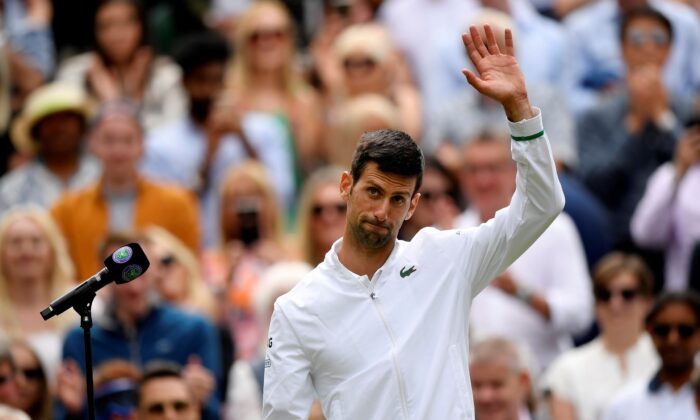 Serbia's Novak Djokovic during an interview after winning his quarterfinal match against Hungary's Marton Fucsovics at The Wimbledon Tennis Championships in London, UK on July 7, 2021. (Toby Melville/Reuters)
Tennis

LONDON—A business-like Novak Djokovic threatened to short-change over 14,000 fans who had forked out 170 pounds ($234) for Wednesday’s Centre Court tickets when, after only 19 minutes of action, he stood on the cusp of bagging the first set 6–0.

Trailing 0–5 and 15–40 on serve, it seemed like Marton Fucsovics’s first foray into a Grand Slam quarterfinal would be short and not very sweet.

But somehow the 29-year-old avoided disappearing into a Wimbledon sinkhole for two hours and 17 minutes before Djokovic pushed him over the edge for a 6–3 6–4 6–4 win that secured him a place in the All England Club semifinals for a 10th time.

Playing in his 50th Grand Slam quarterfinal, Djokovic recorded a century of tour-level wins on grass and his 315th victory at a major.

While such numbers might sound impressive, for Djokovic the only statistic that really matters is that his dream of joining Roger Federer and Rafa Nadal on a record 20 Grand Slam titles was still very much alive as was the chance of becoming the first man since Rod Laver in 1969 to complete the calendar slam.

“I am aware of certain stats, I love this sport with all my heart, body and soul have been devoted to it since I was four,” said the world number one, who is bidding to win his third consecutive Wimbledon title, and sixth overall.

“Sometimes things do look surreal for me but I try to live in the moment and take every opportunity I have on the court. Going for history is a huge inspiration for me, let’s keep it going.”

Fucsovics was also chasing history, which in case was to become the first Hungarian man to reach the Wimbledon semifinals since Jozsef Asboth in 1948.

As the 29-year-old stared into the abyss of being wiped out in the opening set, a string of sloppy Djokovic errors not only handed Fucsovics a lifeline but he unexpectedly won three games in a row to the delight of the crowd who rapturously applauded the Serb’s misfiring shots.

Djokovic finally won the opening set at the sixth attempt—23 minutes after holding his first set point— when the lunging Hungarian mis-hit a forehand long.

Fucsovics produced some gutsy shots to hang in with Djokovic till 4–4 in the second set and even won a lung-busting 27-shot baseline rally that kept the fans on the edge of their seats.

The effort of winning that single point, however, appeared to have sucked the life out of Fucsovics as two points later Djokovic broke for a 5–4 lead.

When Fucsovics banged a service return long to surrender the second set, the prolonged roar from Djokovic signalled that it was game over for the Hungarian.

“It was a solid performance,” summed up Djokovic.

“I started extremely well, didn’t do many things wrong in the first six games. One break of serve in the second and third set was enough to clinch the victory—credit to Marton for fighting and hanging in there, he had a great tournament.”