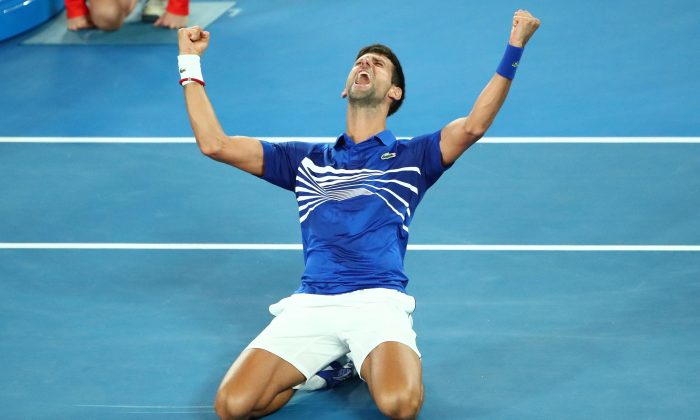 Novak Djokovic of Serbia celebrates after winning championship point in his Men's Singles Final match against Rafael Nadal of Spain during day 14 of the 2019 Australian Open at Melbourne Park in Melbourne, Australia on Jan. 27, 2019. (Scott Barbour/Getty Images)
Tennis

SYDNEY—Tennis world number two Novak Djokovic said he is concerned that smoke might cause some problems at the Australian Open later this month as bushfires continued to blaze across large sections of the southeast on Sunday.

Hundreds of fires in New South Wales and Victoria have killed at least 24 people and destroyed more than 5.25 million hectares (13 million acres) of land over the last few months.

Smoke from the blazes has also resulted in hazardous conditions in Sydney, where the final rounds of the inaugural ATP Cup will take place next weekend, and Melbourne, where the year’s first tennis Grand Slam gets underway on Jan. 20.

Seven-times Australian Open champion Djokovic, who is playing in the ATP Cup, said he hoped the crisis would “dissipate” soon but that an action plan would be needed to avoid any impact on the health of players if it did not.

“If it continues [in the] same way and if the quality of air is affected in Melbourne or Sydney, I think Tennis Australia probably will be forced to create some rules about it,” he told a Brisbane news conference in the early hours of Sunday morning.

The smoke has so far caused the most disruption to the sporting calendar in Canberra, where a Twenty20 cricket match was abandoned on Dec. 21 when conditions became too hazardous to continue.

An ATP Challenger/ITF Futures tennis tournament scheduled for next week in the capital was moved to Bendigo, while on Sunday, the city’s ACT Brumbies rugby team announced they would be moving their pre-season training camp to Newcastle.

The twice Super Rugby champions made the decision after their training ground at the University of Canberra was closed indefinitely “due to hazardous air quality.”

“The small changes we have had to make are nothing in comparison to the distressing position so many people in our region are sadly experiencing at the moment,” coach Dan McKellar said in a statement.

“Player welfare is always a priority, and temporarily moving to Newcastle will allow us to continue to prepare for our round one match on Jan. 31.”

The New Year’s cricket test at the Sydney Cricket Ground, one of the most prominent fixtures on the Australian sporting calendar, moved into its third day without disruption. However, there was a distinct smell of smoke in the air on Sunday.

Australian sportsmen and women have joined actors, pop stars, and Britain’s royal family in pledging financial support for those affected by the bushfires.