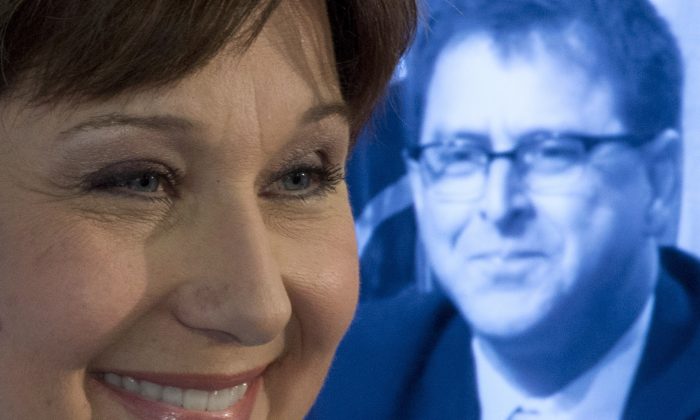 A picture of B.C. NDP leader Adrian Dix is seen in the background as B.C. Liberal leader Christy Clark addresses the media in Maple Ridge Wednesday. The Dix picture was a part of a prop the liberals were using called the spend-o-meter. The two main contenders continue their war of words with Election Day less than a week away. (THE CANADIAN PRESS/Jonathan Hayward)
Canada

Dix had a simple answer for each of the probing concerns lobbed his way in crowded and heated campaign stops in heavily Chinese areas in Richmond and Vancouver: blame the Liberals—but in a respectful way.

At one point in Richmond, Dix walked away from a scrum in mid-sentence, saying his Richmond Centre candidate Frank Huang came to Canada to find and build a new life and he doesn’t need the disrespectful Liberals dredging up his past as a Chinese Communist party member.

Huang, who has won a B.C. journalism award for his coverage of one of Prime Minister Stephen Harper’s trips to China, said he was a Chinese Communist before immigrating to Canada in 2000, but said everybody in China who gets involved in politics is forced to be a Communist.

He later confirmed that on the same day last February that he was asked to seek a nomination for the NDP in the May 14 election, the Liberals also approached him to run for them, but he chose the NDP after discussions with his family.

Dix’s testy side has started to show itself in recent days as the campaign enters its final week with the NDP’s front-runner status wobbling and Liberal Leader Christy Clark gaining ground on the strength of her personal appeal and push to make the economy and the NDP’s past failures on the economic front the campaign’s central issue.

Dix, who has been limiting his news conferences to one per day, held three scrums with reporters Tuesday, one in Sidney on Vancouver Island, and two others in Richmond and Chinatown.

“It is so disrespectful to say that people who come to Canada and are part of the community in Canada and are Canadian citizens can’t participate in politics in Canada,” Dix said in Richmond. “Frank’s a great candidate and he’s going to do an excellent job here.”

Huang said he quit the Chinese communist party before coming to Canada.

Clark has attempted to discount Dix’s claims to run a positive campaign by framing his position on natural resources as negative.

“They say they’re in favour of resource development, but then they say no. Positive means negative, yes means no. I think we’re kind of getting used to that from the NDP.”

In northern B.C., Clark made a stop where she again made the case for liquefied natural gas (LNG) development as the solution that would lift the province out of debt.

As part of a campaign that has largely been characterized by visits to job sites, Clark wasted no time in reminding reporters after the tour of Spectra Energy that the LNG industry could generate 100,000 jobs and $100 billion in revenue over the next three decades.

“(NDP leader) Adrian Dix will tell you this is a fairytale, but if you want to know if it’s real, why don’t you ask the 164 employees who work here full time, or the hundreds more who are hired for ongoing maintenance activity?” she said.

“This opportunity is very real for all of the people in our province.”

She repeated a similar refrain in Kitimat where LNG could one day be shipped off to markets in Asia.

Dix has spent the last week emphasizing that his party is one that not only says yes to LNG, but to other sectors such as mining, forestry, tourism, and film and television as well.

Despite that, Clark maintained that Dix’s “go-slow” attitude towards resource development, and his proposal to expand the carbon tax on oil and gas emissions, would sink the LNG industry.