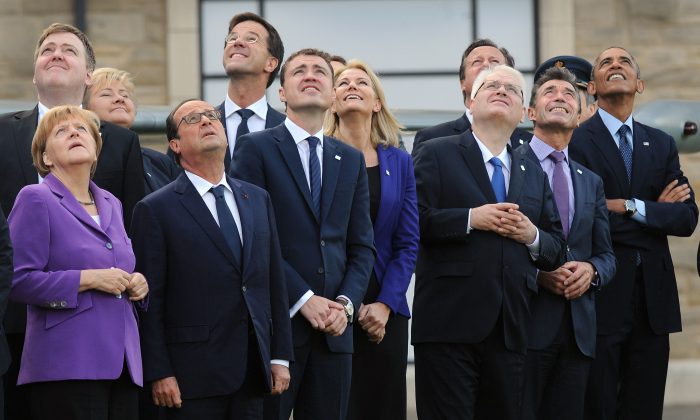 As Scotland considers an amicable split from the UK, messy divorce proceedings in Ukraine are convincing another unhappy family—NATO—to stick together

“All happy families are alike,” Leo Tolstoy wrote at the beginning of “Anna Karenina.” “Each unhappy family is unhappy in its own way.”

Imagine, as Lenin liked to do, that a country is a marriage of different nationalities. Lenin believed, and he enshrined this principle in the Soviet Constitution, that if the federal family was unhappy and one of the partners in the polyamorous union wanted out, it could initiate divorce proceedings. The Soviets were big on secession—at least in theory.

In practice, Moscow was more a believer in traditional family values. It tried to hold on to the wayward Baltic republics—even as Lithuania, Latvia, and Estonia were claiming the transnational equivalent of spousal abuse in their case for dissolution—all the way up to the point when the mother of all divorces took place in 1991 and the Soviet family broke into its constituent parts.

Today, one of the offspring of that unhappy union, modern-day Ukraine, is facing its own family problem. Russian-speaking separatists in the eastern part of the country have been fighting for a divorce for the last six months. The government in Kyiv argues that it’s just a minor spat that outsiders—namely, Russia—are fueling for their own advantage.

Russian President Vladimir Putin, echoing Lenin, recently gave a thumb’s up to secession by raising the possibility of statehood for eastern Ukraine. Or perhaps, as his spokesman later backtracked, he was just talking about initiating talks between rebels and the Ukrainian government. It’s hard to tell with Putin. He has also said that Russia is not providing assistance to the separatists and has not introduced its own forces across the border, two assertions that fly in the face of the evidence.

Divorce has been on Putin’s mind recently, ever since announcing his own split from Lyudmila Putina, his wife of 30 years. She declared the separation a “civilized divorce.” But rumors of affairs and even illegitimate children continue to swirl. Putin wasn’t exactly the most public of family men. He never referred to his daughters by name, only mentioning them as “they.” And he stopped appearing publicly with his wife long ago, suggesting that the estrangement was not of recent vintage. Commentators speculate that Putin intends to bolster his image of virility by marrying a gymnast half his age.

But perhaps the real reason for the divorce is geopolitical. Putin simply wanted to send a signal to Ukraine that it should not be so emphatic about maintaining what Russia believes is an unhappy family. “Divorce is in the air,” the Russian president could be heard singing. “Everywhere I look around, divorce is in the air, every sight and every sound.”

Europe is full of unhappy families, and they are all different. The divorce proceedings taking place in Ukraine today are violent. But elsewhere, the respective partners are considering more amicable partings of the ways. Scotland, for instance, offers an entirely different version of divorce, European-style.

Later this month, Scots will go to the polls to vote on a referendum on whether to stay in the United Kingdom or not. Over the summer, it looked as though voters would easily defeat the measure and Scotland would remain more-or-less happily married to England and Wales. At the beginning of August, public opinion polls indicated that the vote would be 61 percent against independence and 39 percent in favor. The most recent polling shows a considerable narrowing of the margin, with the “yes to divorce” vote rising to 47 percent and the “no” faction dropping by the same percentage.

However amicable the divorce might be, if it goes through, the consequences will be messy, and I’m not just talking about scratching out the Scottish part of the Union Jack. For instance, London will have to figure out a new place to locate its Trident nuclear submarines, which currently hang out at the Scottish port of Gare Loch. Apparently, it would take nearly a decade for the U.K. to build another facility for the Tridents, and it would cost more money than it’s worth to maintain the deterrence. So, a vote for Scottish independence becomes a de facto vote for nuclear abolition, a happy consequence of the divorce proceedings.

Other concerns are less felicitous, such as the question of EU membership. If Scottish voters back independence, the new country would no longer be part of the European Union. After that, however, the situation gets murky. If the EU invokes Article 49 of the Treaties of the European Union, Scotland will have to apply just like Serbia or Turkey, and readmission might take years. Or the EU could opt for Article 48, which would initiate an “amendment” process that might get Scotland in through the back door in a matter of months.

But wait—it gets even murkier. It turns out, paradoxically, that Scotland is far more pro-EU than the rest of the U.K.. So, if Scotland goes independent, rump U.K. might very well take the opportunity to do what the right-wing U.K. Independence Party has been urging all along: give Brussels the middle finger.

And then there are the economic implications of Scottish independence. Scotland is considerably more left-wing than the rest of the U.K. If it leaves, what remains will be little more than Thatcherism warmed over. As The Guardian has lamented, the independence debate reveals, “It’s become impossible to express opposition to free market economics via the main Westminster parties.” Note to the British Left: step up your game or your Scottish comrades will abandon you to the wolves.

Whichever way the vote goes, however, it has been a model of democratic procedure—unlike the referendum in Crimea last March, which took place in an atmosphere of intimidation and fear. Indeed, the Crimeans never really had an option of independence. Divorce wasn’t on the ballot—only a shotgun marriage to Russia. Park Geun-Hye, the unattached president of South Korea, likes to say that she is married to her nation. Perhaps that’s the real reason why Putin jettisoned Lyudmila—so he could take Crimea to the altar (cue the Percy Sledge wedding song: When a Man Loves a Peninsula).

Scotland and Ukraine were on the minds of the heads of state of NATO countries when they meet in Wales last week. It’s already been called the most important NATO summit since the fall of the Berlin Wall.

After all, up until recently, NATO was having its own family problems. The mission in Afghanistan was a costly fiasco and introduced numerous divisions into the alliance. The intervention in Libya not only left that country in chaos but also revealed the enormous gap in capabilities among members. And despite U.S. entreaties, alliance members are not even meeting their budgetary obligation of spending 2 percent of GDP on their militaries, which suggests considerable differences in threat perception.

Then the Russia–Ukraine conflict broke out, and the 65-year-old NATO started to get frisky again. Indeed, NATO ministers should give an award to Vladimir Putin. After all, the Russian leader has given the alliance more collective purpose than it’s had in years. The conspiracy-minded might well believe that NATO expanded to the borders of Russia precisely to provoke the bear to lash out with its claws. NATO, after all, needs a raison d’être. No enemies, in the long run, means no NATO.

Even with Putin providing the glue to stick NATO back together, last week’s family gathering in Wales was not all sweetness and light. There were disagreements over whether to place NATO troops in Eastern Europe as Poland has urged, whether to target Russian missiles with European missile defense batteries as the Baltic countries are proposing, and whether to fast-track membership for Georgia as John McCain has lobbied for.

And not only European issues generated controversy. There’s also Afghanistan, Iraq, global partnerships, and so on. But thanks to Vladimir Putin, these disagreements pale in comparison to the overall consensus on Russia, and NATO won’t join the ranks of unhappy families any time soon.

Meanwhile, Ukraine is leaning toward trading its nonaligned status for membership in NATO. It’s entirely understandable why a militarily weak country facing an incomparably stronger neighbor would want to have NATO on its side. But with the war bogging down in the east, Ukraine would be wise to use its current nonaligned status as a bargaining chip with Russia to negotiate an end to the conflict, greater autonomy for the eastern realms, and a return of all Russian soldiers and war materiel to their home country.

John Feffer is the director of Foreign Policy In Focus. This article previously published at FPIF.org.